Liverpool take on Napoli in the group stages of the Champions League on Wednesday night. Here is the team we expect Jurgen Klopp to select for the game:

Liverpool take on Napoli in the group stages of the Champions League on Wednesday night. Here is the team we expect Jurgen Klopp to select for the game:

Goalkeeper: There will be no change in goal as Alisson Becker is certain to keep his place between the sticks with Adrian once again on the bench.

Defence: Liverpool are expected to go with their strongest available back four as Klopp won’t want to take any chances against a dangerous Napoli side. Trent Alexander-Arnold and Andy Robertson should therefore retain their places in the full-back positions.

Virgil van Dijk will obviously keep his place at the heart of defence but Joel Matip remains on the sidelines as he continues to overcome a niggling knee injury. Joe Gomez is pushing for a recall but I think we’ll see Dejan Lovren continue alongside van Dijk tomorrow night.

Midfield: Naby Keita is pushing for a recall after not featuring during the 2-1 victory over Crystal Palace at the weekend as he was feeling ill. The midfielder is now considered fully fit but I think Keita may have to settle for a place on the bench with James Milner the man most likely to come in if Klopp freshens things up in the middle of the park.

Jordan Henderson could be given a rest but I expect Fabinho to keep his place in the holding role while Gini Wijnaldum should also start for Liverpool. Adam Lallana will have to settle for a place among the substitutes.

Attack: Liverpool have been boosted by the news that Mohamed Salah is now fully fit and is expected to return to the starting eleven on Wednesday. Salah didn’t feature against Palace at the weekend after only returning to full training last Friday having struggled with an ankle injury in recent weeks but the Egyptian international is back in contention.

Alex Oxlade-Chamberlain is the man set to drop out after he started against Palace on Saturday. Sadio Mane should keep his place on the left side of the Liverpool attack after another impressive showing at Selhurst Park.

Roberto Firmino is expected to lead the line up front after scoring the late winner against Crystal Palace so the likes of Divock Origi and Xherdan Shaqiri will have to make do with places on the bench. 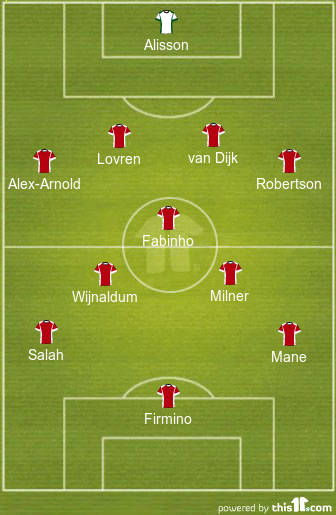