Tottenham will be looking for a win over Bournemouth on Saturday afternoon. Here is the side we think Jose Mourinho will select for the game:

Tottenham will be looking to close the gap on the top four with a win over Bournemouth on Saturday afternoon. Here is the side we think Jose Mourinho will select for the game:

Goalkeeper: Spurs will continue to be without Hugo Lloris as he’s still recovering from a dislocated elbow so Paulo Gazzaniga will once again start between the sticks this weekend.

Defence: Tottenham have confirmed a blow with the news that Ben Davies is facing a spell on the sidelines after suffering ankle ligament damage during the win over West Ham last weekend. Therefore, Danny Rose should keep his place at left-back on Saturday.

Serge Aurier is expected to start at right-back once again after continuing his fine recent form with a goal-scoring display against Olympiacos in the Champions League on Tuesday night.

Toby Alderweireld should keep his place in the middle of the back four but Jan Vertonghen is pushing for a recall so Davinson Sanchez might be the man to make way against Bournemouth.

Midfield: Mourinho is a fan of Eric Dier and he’s expected to keep his place in midfield having started in Tottenham’s last two games since the Portuguese coach replaced Mauricio Pochettino as manager.

Tanguy Ndombele is pushing for a recall so we could see Harry Winks dropping to the bench against Bournemouth if Mourinho wants some fresh legs in the middle of the park.

Moussa Sissoko appears to have lost his place in the Tottenham starting eleven after being named on the bench for both of Mourinho’s games so far so the Frenchman may have to settle for a place among the subs again.

Attack: Dele Alli continued his resurgence with another goal in midweek and he’s expected to retain his place in the attacking midfield role. Christian Eriksen made a positive impact after replacing Dier while Spurs were losing 2-0 on Tuesday but I still think he’ll have to make do with a place on the bench this weekend.

Lucas Moura says he’s enjoying his football again after being brought back into the starting eleven by Mourinho so he could keep his place on the right wing while Hueng-min Son is expected to once again start in attack.

Obviously Harry Kane will continue to lead the line up front for Tottenham and he’ll be looking to get himself among the goals. Erik Lamela remains a doubt with a knock but Giovanni Lo Celso will be an option from the bench for Mourinho. 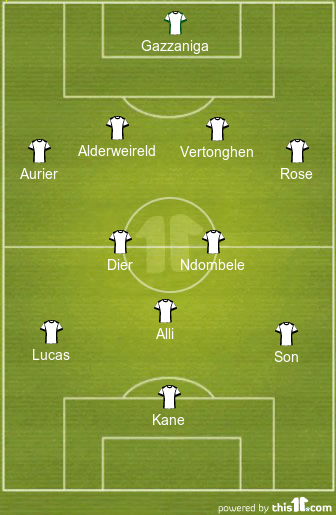