Jose Mourinho returns to Old Trafford as Tottenham take on Manchester United tonight. Here is the side we think Jose Mourinho will select for the game:

Jose Mourinho returns to Old Trafford as Tottenham take on Manchester United tonight. Here is the side we think Jose Mourinho will select for the game:

Goalkeeper: Spurs will once again be without the services of Hugo Lloris as he’s still recovering from a dislocated elbow so Paulo Gazzaniga will continue between the sticks against United.

Defence: Mourinho is still without Ben Davies as the full-back is facing a spell on the sidelines with an ankle ligament injury. Jan Vertonghen started at left-back during the 3-2 win over Bournemouth at the weekend but I think Danny Rose will be recalled to help deal with the pace of Daniel James down the flank.

Vertonghen may keep his place in the team by moving into the middle of defence. Davinson Sanchez is the man most likely to make way as Toby Alderweireld should keep his place while Serge Aurier should continue at right-back ahead of Kyle Walker-Peters.

Midfield: Eric Dier has cemented himself as a regular again following the arrival of Mourinho as manager so he should keep his place in the Tottenham starting eleven this evening.

Tanguy Ndombele started at the weekend but Harry Winks is pushing for a recall so we could see Tottenham’s big-money summer signing dropping to the bench against Man Utd. Winks would give Spurs a bit more solidity in the middle of the park and Mourinho may want that protection away at Old Trafford.

Attack: Moussa Sissoko lined-up on the right side of the Spurs attack at the weekend and got himself a rare goal but I wouldn’t be surprised to see Lucas Moura recalled as Mourinho will want some pace in his front three.

Harry Kane will obviously continue to lead the line up front for Tottenham while Hueng-min Son should keep his place in the Spurs attack after bagging a couple of assists against Bournemouth.

Dele Alli continued his resurgence under Mourinho with a brace on Saturday and he’s almost certain to keep his place in the attacking midfield position when Tottenham take on Man Utd later this evening.

That means Christian Eriksen may have to settle for a place among the substitutes along with Giovani Lo Celso but Erik Lamela remains on the sidelines with a thigh injury that’s hampered him in recent weeks. 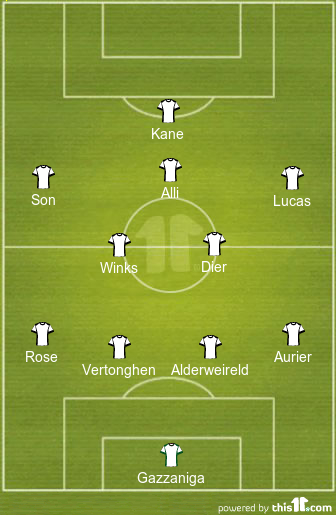