Manchester United take on Tottenham at Old Trafford on Wednesday night. Here is the team we think Ole Gunnar Solskjaer will select for the game:

Manchester United will be looking to get back to winning ways when they take on Tottenham at Old Trafford on Wednesday night. Here is the team we think Ole Gunnar Solskjaer will select for the game:

Goalkeeper: I don’t think there is any doubt that David De Gea will keep his place in goal so Lee Grant or Sergio Romero will be on the bench.

Defence: Solskjaer is expected to stick with the back four that was deployed at the weekend despite United being held to a 2-2 draw by Aston Villa. Brandon Williams appears to have cemented himself as Solskjaer’s first choice left-back following a number of impressive performances so he could start ahead of Luke Shaw and Ashley Young against Tottenham.

Harry Maguire and Victor Lindelof will continue their partnership in the middle of the defence while Aaron Wan-Bissaka should keep his place at right-back. Axel Tuanzebe is likely to be named on the bench but Eric Bailly, Tim Fosu-Mensah and Diogo Dalot are still lacking match fitness.

Midfield: Manchester United are expected to be handed a major boost with Scott McTominay in-line to make his comeback. The Scottish international has missed United’s last three games with an ankle injury and was close to being in contention for the Villa game so he should return against Tottenham tomorrow night.

However, United will once again be without the services of Paul Pogba as he’s still working his way back to full fitness following a niggling ankle injury. The Frenchman is back in training and might be in the squad to face Man City at the weekend but the Spurs game will come too soon.

Nemanja Matic will be handed a late fitness test as he looks to return from a troublesome muscle problem but Fred could keep his place in midfield. Andreas Pereira is the man most likely to make way if McTominay returns.

Juan Mata got a run out against Villa at the weekend but he didn’t really take advantage of the rare start so Jesse Lingard could be recalled to play in the advanced central midfield position on Wednesday.

Attack: United are unlikely to make any changes to their front three as I think we’ll see Anthony Martial continuing to lead the line up front despite missing a number of chances against Villa on Sunday.

Marcus Rashford should also keep his place in the Man Utd attack while Daniel James playing from the right so the likes of Mason Greenwood will have to settle for a place on the bench against Tottenham. 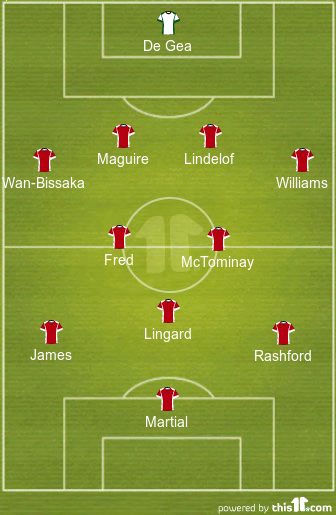