Pep Guardiola has confirmed an injury blow ahead of Manchester City’s clash with Manchester United. Here’s the team news and expected line-up

Manchester City will hope to close the gap on Liverpool with a win over Manchester United at the Etihad on Saturday evening.

Ahead of the game, boss Pep Guardiola has been speaking to the media at his pre-match press conference this afternoon and he’s provided a team news and injury update including the latest on the fitness of Sergio Aguero and Oleksandr Zinchenko.

Aguero has missed City’s last three games in all competitions with a muscle issue and there were hopes the striker could make a recovery in time to feature in the Manchester derby this weekend.

However, Guardiola has confirmed a big blow with the news that Aguero remains unavailable for selection so Gabriel Jesus is expected to continue to lead the line up front in his absence tomorrow evening.

There is better news regarding the fitness of Zinchenko as Guardiola has confirmed the full-back has resumed full training this week after recovering from a knee injury but doubts the he’s ready to play the full ninety minutes just yet.

“He’s [Zinchenko] been training for the last few days. He trained with all the squad. He’s ready, but in his physical condition I don’t know how many minutes he can play.

“Sergio is not available.”

Angelino started at left-back during City’s win at Burnley in midweek but Benjamin Mendy is expected to be recalled against Man Utd with Zinchenko possibly vying for a place on the bench.

Guardiola is likely to make another change to his back four with John Stones pushing to replace Nicolas Otamendi. Fernandinho will continue at the heart of defence with Aymeric Laporte still out with a knee injury. Kyle Walker should keep his place ahead of Joao Cancelo at right-back.

Rodri continues to impress in the holding role and he should retain his place despite Ilkay Gundogan being available following suspension while David Silva is likely to keep his place along with Kevin De Bruyne.

Raheem Sterling is almost certain to start in the Man City attack but we may see Riyad Mahrez recalled in place of Bernardo Silva on the right wing. Leroy Sane is still working his way back from a knee injury. 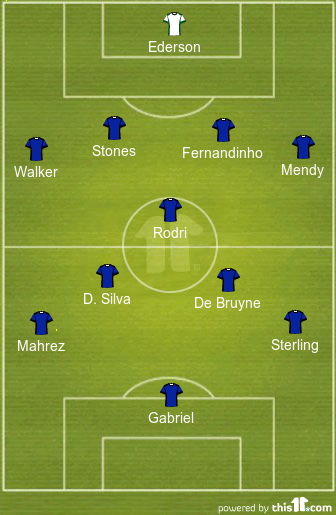