This is our match preview ahead of Arsenal’s Premier League clash with West Ham at the London Stadium including team news, line-ups and prediction

Arsenal are under huge pressure to end their slump and get back to winning ways with victory over West Ham at the London Stadium this evening.

There has been no ‘new manager bounce’ at Arsenal as Freddie Ljungberg has picked up just one point from his two games as interim boss since replacing Unai Emery with a disappointing 2-2 draw at Norwich followed up by a disastrous 2-1 defeat at home to Brighton last Thursday night.

The loss extended Arsenal’s winless run to nine games in all competitions – their worst run since 1977 – and the Gunners now sit 10 points adrift of the top four in 11th position in the Premier League table.

Therefore, Ljungberg needs to get back to winning ways this evening if Arsenal are to retain any hope of climbing back up the table to push for a Champions League qualification place this season.

However, Arsenal head across London to face a West Ham side who are also in desperate need of a win as they sit just one point off the relegation zone in 16th place following a 2-0 defeat at Wolves last week.

Arsenal have confirmed they will continue to be without Dani Ceballos as the midfielder is still recovering from a hamstring injury that’s kept him out of action for the past six weeks.

Rob Holding is also a doubt for tonight’s game as he’s struggling with a knee problem that’s hampered him in recent games but Arsenal have no fresh injury concerns to worry about.

Kieran Tierney, Matteo Guendouzi, Nicolas Pepe and Gabriel Martinelli are all pushing for recalls after being named on the bench against Brighton.

West Ham will hand a late fitness test to Michail Antonio as he’s carrying a minor groin injury while Jack Wilshere could return to feature against his former side after recovering from his own groin issue.

Lukasz Fabianski remains out with a hip injury and Manuel Lanzini is another long-term absentee with a fractured collarbone. 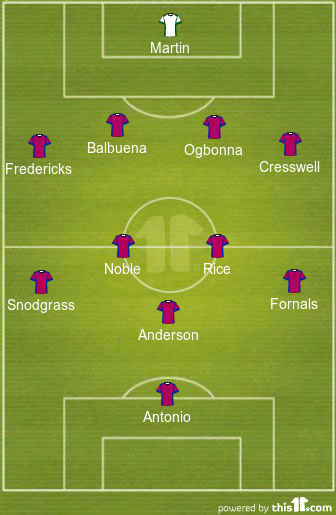 West Ham 1-2 Arsenal: Arsenal lost this fixture 1-0 last season but it was their first defeat in 10 visits having won 7 of their last 10 trips to West Ham. The Hammers have lost their last two Premier League home games but Arsenal are on a horrendous run and have won just one of their last 11 away games so this is going to be an interesting contest.

However, there have been slight improvements in Arsenal’s performances under Ljungberg and I think this is a good opportunity for them to get back to winning ways. I expect a tight game but fancy Arsenal to edge it 2-1.