Liverpool are in Austria ahead of tonight’s Champions League clash with Salzburg. Here is the team we expect Jurgen Klopp to select for the game:

Liverpool are in Austria ahead of tonight’s Champions League clash with Salzburg. Here is the team we expect Jurgen Klopp to select for the game:

Goalkeeper: I don’t think we’ll see any changes in goal as Alisson Becker is expected to once again start between the sticks with Adrian on the bench.

Defence: Liverpool need a positive result so Klopp won’t take any risks in defence. Dejan Lovren has been passed fit to travel despite limping off with cramp during the 3-0 win at Bournemouth on Saturday. As long as he’s fit, Lovren should continue his partnership alongside Virgil van Dijk in the middle of the back four. Joel Matip remains out with a knee injury.

Trent Alexander-Arnold is set to return at right-back with Joe Gomez making way while Andy Robertson should continue on the opposite side of the Liverpool defence tonight.

Midfield: Klopp will continue to be without the services of Fabinho as the Brazilian midfielder has been ruled out for a number of weeks with a knee ligament injury that he sustained last week.

However, Gini Wijnaldum is back in contention after recovering from a minor muscle issue which kept him out of the win at Bournemouth so he should be restored in midfield with James Milner making way.

Jordan Henderson is expected to keep his place in the Liverpool starting eleven while Naby Keita should have done enough to retain his spot after putting in a hugely impressive performance at the weekend.

Adam Lallana hasn’t travelled to Austria as he’s been ruled out with a muscle problem that forced him to miss the win over Bournemouth on Saturday afternoon so youngster Curtis Jones has been named in the squad.

Attack: Klopp rested Sadio Mane at the weekend so he’s expected to be recalled to the Liverpool attack against Salzburg. Mohamed Salah and Roberto Firmino were rested for the Everton last week so as long as they didn’t suffer any issues at the weekend I expect them to keep their places.

That means Alex Oxlade-Chamberlain will be the man to drop out for Mane while Divock Origi and Xherdan Shaqiri may also have to settle for places among the Liverpool substitutes this evening. 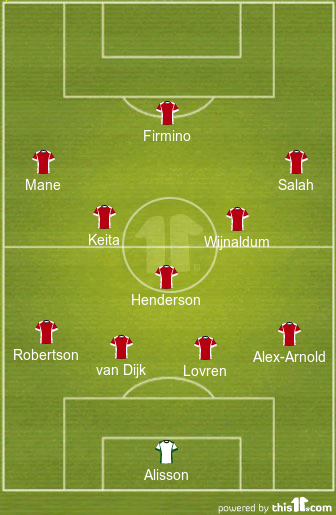