Jurgen Klopp has confirmed a major injury blow with 5 players ruled out of Liverpool’s Premier League clash with Watford on Saturday. 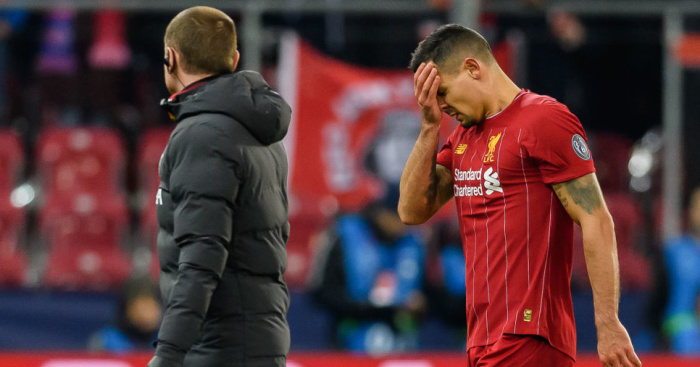 Liverpool will look to cement their position at the top of the table with a win over Watford at Anfield on Saturday afternoon.

Ahead of the game, Jurgen Klopp has been speaking to the media at his pre-match press conference this afternoon and he’s confirmed a major injury blow with the news that Dejan Lovren is facing a spell on the sidelines.

Lovren limped out of Liverpool’s 3-0 win over Bournemouth last weekend with cramp but was passed fit to start in their crucial Champions League group decider against Salzburg on Tuesday night.

However, the Croatian international was once again forced off shortly after half-time as he was replaced by Joe Gomez in the 53rd minute during Liverpool’s 2-0 win over Salzburg in Austria.

Klopp has now confirmed Lovren will miss the visit of Watford on Saturday after suffering a muscle issue in midweek. The Liverpool boss says the injury is ‘more serious than last time’ but no fixed timeframe has been put on his recovery.

“He [Lovren] is out, muscle this time – more serious than last time. We don’t have a timeframe.”

Liverpool will be praying Lovren isn’t ruled out for any significant period of time as they are stretched in the middle of defence with Joe Gomez and Virgil van Dijk their only senior options at centre-back.

Fabinho has played in defence before but the Brazilian remains on the sidelines for the foreseeable future with an ankle ligament injury while Joel Matip is also still working his way back from a knee injury that’s hampered him in recent weeks.

Elsewhere, Adam Lallana is expected to miss tomorrow’s clash with Watford due to a muscle issue that’s forced him to miss Liverpool’s last two games while Nathaniel Clyne remains out with a long-term knee injury.

It means Klopp will be without five players as Liverpool prepare to welcome Watford to Anfield on Saturday looking to extend their unbeaten start to the season and cement their position at the top of the table.