Chicharito will Thrive on Valencia’s Delivery 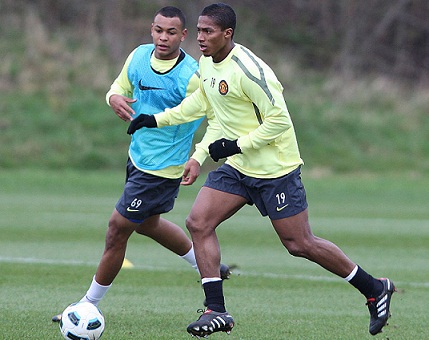 Manchester United may have coped well in his absence, but Antonio Valencia has been sorely missed at Old Trafford. His blistering pace on the right wing that has fans off their seats in anticipation – hoping, and often witnessing a dangerous delivery into a good area for the strikers to pounce on has sadly been absent since the wingers very unfortunate injury.

One loss in the Premier League all season isn’t bad going for United, but boy would they welcome back their Ecuadorian winger who adds a fiery spark and invaluable energy into the United attack providing chance after chance for the strikers. It is the kind of delivery that United’s relative new boy Chicharito will thrive on.

Since Valencia’s injury in September, Javier “Chicharito” Hernandez has proven himself as a deadly finisher, taking the nickname the “baby faced assassin” from United fans. His movement, his awareness of his surroundings, his pace, his vision, his unnerving ability to finish a move off with a delightful finish, have threatened to uproot a strike partnership worth a combined total of around £50 million in Rooney and Berbatov.

So just think of what the Mexican boy will do when he finds ball after ball flying into his territory – the oppositions box. I predict a fantastic partnership between him and Valencia in the future when the winger is fully recovered and back on form. It will be an exciting, and rather frightening prospect, especially for defenders.

Valencia showed it last season – his delivery and intelligent balls into the area helped Rooney to his highest ever scoring total. He provided the assists that Rooney has missed this season – as the English striker has gathered his lowest ever total of goals with seven (granted, the season isn’t over).

With Rooney gradually building confidence, starting with his spectacular overhead kick a few weeks ago against City, Berbatov having his best United season by far, and with the little pea having an astonishing first year at Old Trafford, there will be healthy competition for the front spots. When Nani and Valencia occupy the wings, the strikers will have no excuses for a lack of goals, with the deliveries coming at them every two minutes, and hopefully the goals will come in, helping United to more trophies. Exciting times, no matter what some say.