All Common Football Referees Hand Signals You Should Know

What is the meaning of the common football referee hand signals? Dig into the article below to learn about referees and their common hand signals.

Football referees are the people who have a decisive role in each match from small scale to large international scale. In many matches, they have different hand signals in place of words. What exactly are those signals? How does a football referee operate a match? Football referees always follow a standard with separate signals. These symbols are also the primary means of communication between them and the players on the field. Explore the information Thabet bookies shared below to know more about football referee hand signals.

Who is the football referee?

The football referee is the person who controls the matches on the pitch. They are the person who makes important decisions with the situations of player fouls and disputes. Referees’ decisions are final and players and coaches must follow them. That is why the referee is responsible for how the game is run. They always accompany the organizers as well as the domestic and regional football Confederations. 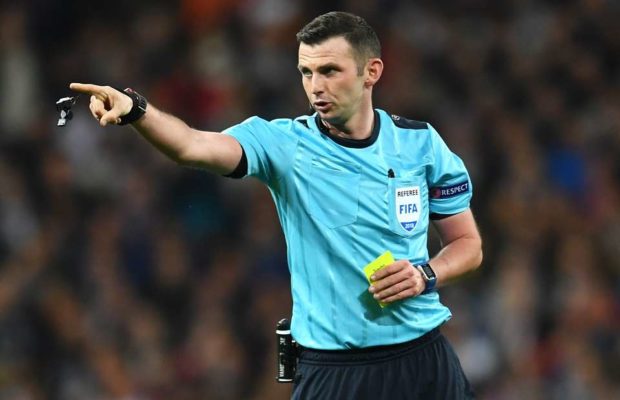 Blow the whistle and point to the penalty spot

The football referee will point to the penalty spot with a long whistle. It is also one of the football referee hand signals you should know when watching football. This action occurs when the team is fouled a penalty kick from the spot eleven yards.

The team is awarded a penalty when the opposing team commits a foul within the penalty area. If a player intentionally plays the ball with his hands, the other team’s player takes the penalty kick and the goalkeeper is allowed to participate in the free-kick area.

A football referee hand signal you cannot ignore is blowing the whistle and showing a card. It happens when the player has committed a serious error or foul. Penalties include yellow and red cards. A yellow card is a warning. A red card is when a player is sent from the field. When receiving two yellow cards, the player has received the same penalty when receiving a straight red card.

In betting, penalty cards are also chosen by many players to bet, including Total bookings, Yellow card betting, Red card betting. With this type of bet in which the player predicts how many penalty cards will appear in the match out until the end, then place a bet based on the odds offered by the bookies. 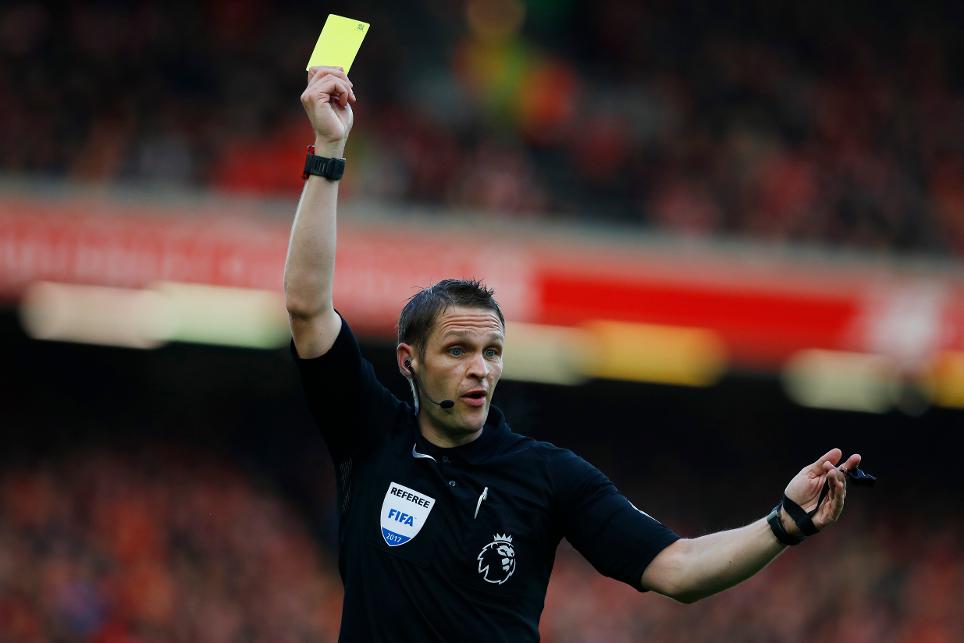 Blow the whistle and point his finger up

With the whistle signal and pointing up, the referee alerts the team at fault with an indirect free kick.

After blowing the whistle, the football referee makes a raised hand for a few seconds and then explains which team will get a free-kick.

The errors that lead to the use of this referee sign in football are when the goalkeeper picks up a teammate’s pass with his hands. This signal is also one of the most common football referee hand signals.

Draw a rectangle in the air

Whenever there is a doubtful and controversial situation, the referee will suspend the game. The referee will use this symbol to request the use of VAR technology, review the situation to make the final decisions with the two teams. 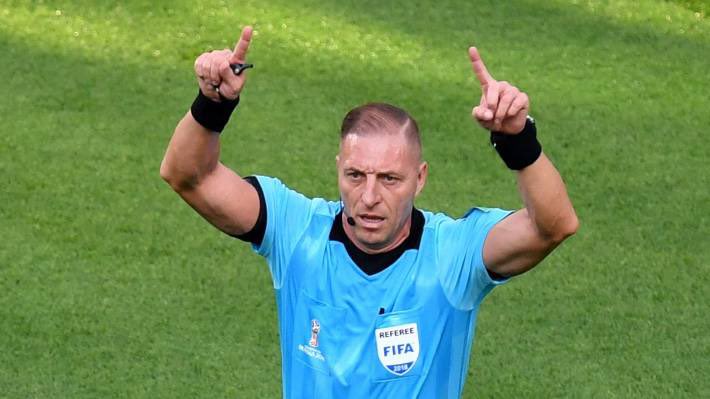 Bring his hand to his arm

Once the football referee gives the hand-to-arm signal, it means that a player has touched the ball with his hand/arm. At that time, the game will be stopped and the ball will be returned to the other team. When this foul occurs in the penalty area, a penalty kick is awarded to the team that did not commit the foul.

Blow the whistle and point forward

This is a football referee’s notation used when a serious foul happens. Normally the offending team will be awarded a free-kick. The referee will point his finger in the direction of the free-kick team’s attack. In particular, a typical mistake with these situations is to let the ball touch the hand.

Pointing fingers to give the team the advantage

Whenever a team has an advantage, the referee’s symbol in football will be a parallel pointing in the direction of that team. The following cases benefit from: 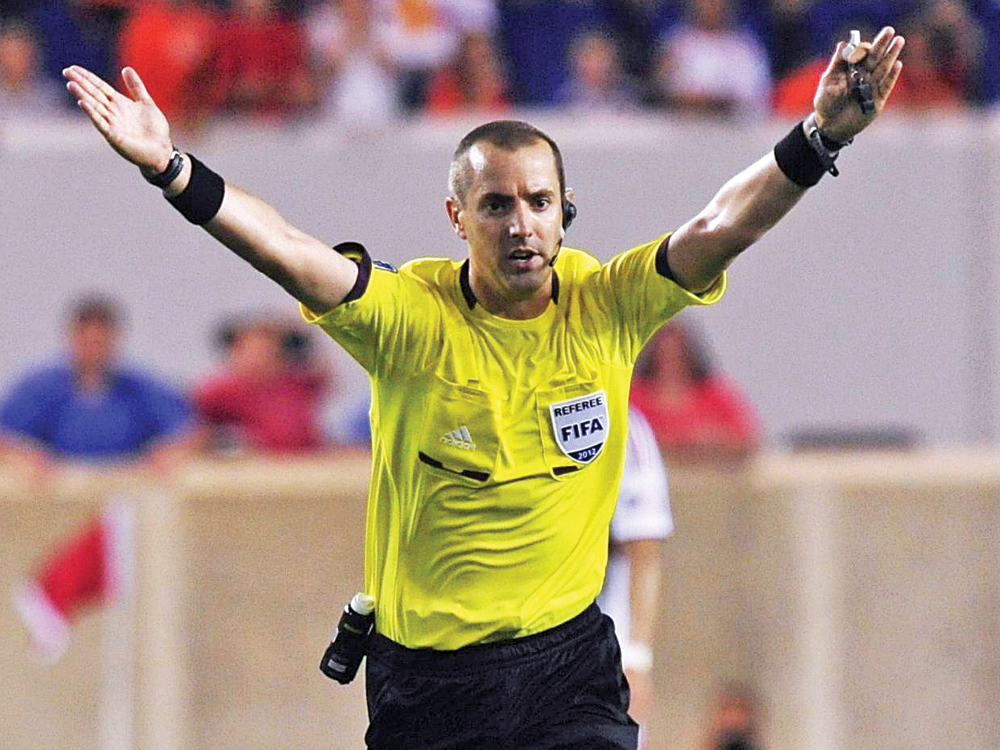 Use flags to point the corner (assistant referee)

We see this situation very often in matches. Therefore, it is the most common football referee hand signal you cannot miss. When the ball leaves the field to the corner of a certain team, the assistant referee will run to the corner and determine which team the ball has touched before going onto the field of play.

If the opponent’s foot touches the ball, the game will restart with the tee shot belonging to the team whose goal is out of the corner. Conversely, if the ball touches the foot of a player of the team that everyone is aiming for, the assistant referee will wave a flag pointing to the corner to indicate to the attacking team a corner. If the corner is left, the referee on the left side will signal and vice versa.

Fly the flag and point in one direction

This situation also happens with a frequency in any football match. That is the ball out of the goal line. At this time, the assistant referee will run to the position where the ball has just come out of the field. Next, he points the flag in the direction of the team that received the throw-in. If the ball is in the opposing team’s control, they must yield the ball to the team receiving the throw-in.

Create a rectangle with flags

When the line umpire raises the flag and creates a rectangle, it means that there is a change of players outside the field and asks the referee to stop the game. For this signal, both umpires on either side signal together for five to ten seconds.

Offside is determined when the ball is sent forward, halfway into the opponent’s court. There are no opposing team players in between this player and the opposing goalkeeper. 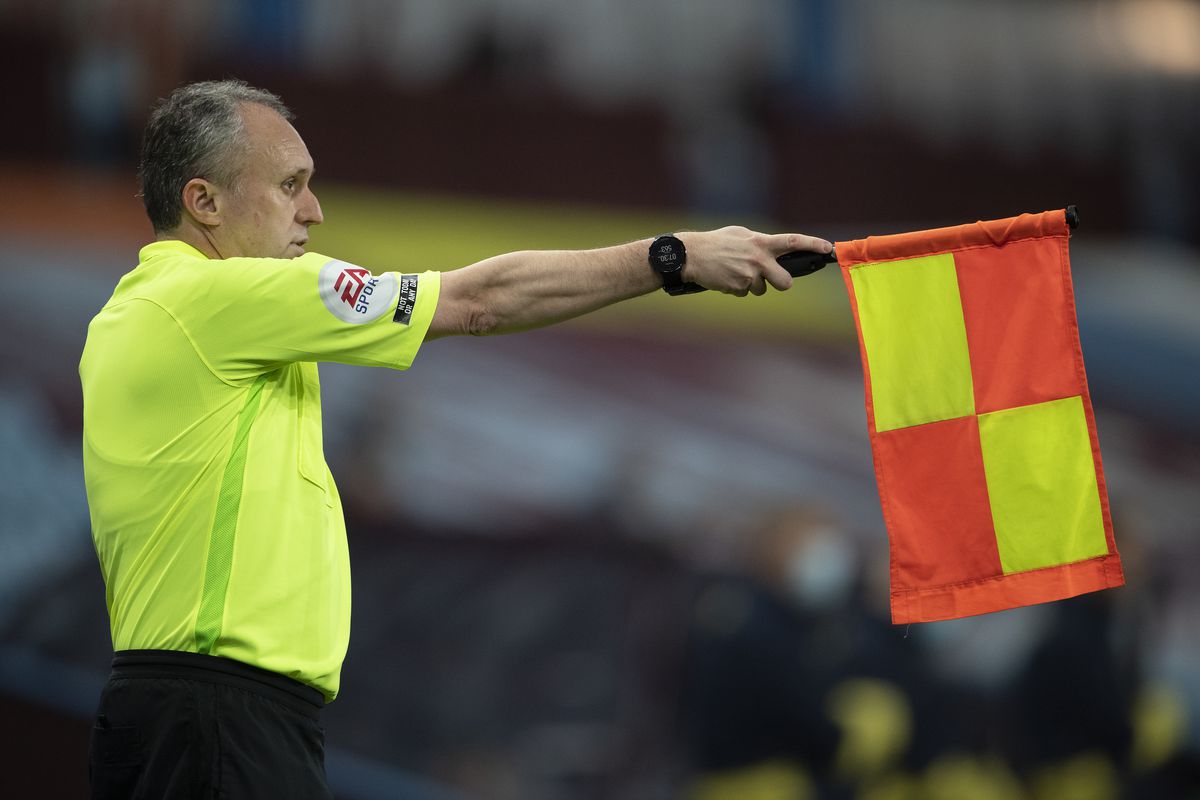 When noticing this situation, the line umpire will raise the flag pointing up in the direction perpendicular to the ground at the right position where the offside occurred. At this time, the referee will blow the whistle to stop this dribble. The referee also restarts the game with the right to serve ceded to the opponent.

We have just provided you with fascinating information about football referee hand signals. We hope to have helped you understand more about football. Have a good day.