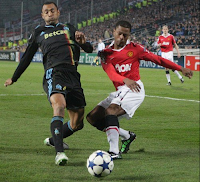 In the return leg of their Round of 16 battle, Manchester United plays host to Olympique de Marseille at Old Trafford, and the Reds need to come away with win to advance in the UEFA Champions League. After drawing 0-0 in the first leg at the Stade Vélodrome, both teams need to score, which has left the door wide open and should set up a very enticing battle at Old Trafford with the winner advancing to the Quarterfinal stage of the competition.

If the Reds and OM are level on any scoreline other than nil-nil, the reigning Ligue 1 champions would move on to the next round, but if it happens to be goalless after full-time then two-legged tie would need to be decided in either extra time or by a dreaded penalty shootout. The nil-nil result in France was not the result for United, however, it does give Marseille the slightest of advantages, but they will need to replicate their form from their away performances in the group stage.

Away from the Stade Vélodrome, OM won two of their three matches – a 2-0 loss against Chelsea at Stamford Bridge; a thumping 7-0 win at Stadium Pod Dubňom over MSK Zilina and then a 3-0 victory over Spartak Moscow at the endearing Luzhniki Stadium.

In the first leg at the Stade Vélodrome, United and Marseille did not produce anything worth noting, because the majority of the match was played in the middle of the pitch.

Neither team was willing to risk taking that expensive gamble, which should have been expected since the Reds and OM were two of the best defensive teams from the Champions League Group Stages. Since their stalemate in the south of France, United has endured a topsy-turvy time in their four fixtures – sandwiching two losses between two wins.

Oddly enough, Marseille has endured a similar run of form in Ligue 1. After they extended their unbeaten streak to 10 matches, Marseille’s run came to a screeching halt against the current league leaders, Lille, however, they have already bounced back with an impressive win this past weekend.

Even though they have dropped a place in their domestic league standings since they played United, Marseille, which is currently in fourth place, are just four points off Lille for the top spot with 11 games to go. Didier Deschamps, who was on hand to watch United’s impressive win against Arsenal in the FA Cup, has turned Marseille into a defensive-minded team, but they have the ability to hit teams with pace on the counterattack.

Loic Remy and Lucho Gonzalez, who were non-factors in the first leg, scored in their latest victory over Stade Rennes, which is a point above Marseille in second place. Andre-Pierre Gignac, who missed the first match with a hamstring injury, has returned to first-team action and will replace Brandao, who has been arrested for raping a 23-year old woman.

Souleymane Diawara and Stéphane M’Bia, who has confessed his desire to play for United, anchor the Marseille defense, and Gabriel Heinze will be thankful that he may not have to contest with the trickery and pace of Nani again.

After getting the best of Arsenal, United’s confidence should be on the rise again, but Sir Alex Ferguson is still short in key areas of the field – especially in the midfield. There has been a bit of positive news surrounding the current injury problems at United with Antonio Valencia coming out of the Arsenal match unscathed, but also the Owen Hargreaves, who is ineligible for the Champions League Knockout Stages, maybe returning to training.

Ferguson selected one of the strangest starting XI that baffled everyone – including Arsene Wenger – so it will be interesting to see which players he chooses against Marseille. With their backs against wall, Manchester United needs to produce another magical European night at Old Trafford against Olympique de Marseille if the Reds have any chance of moving on in the UEFA Champions League Knockout stages.