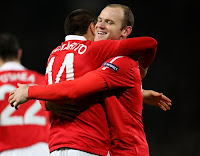 At Old Trafford, Manchester United eked through to the to the Quarterfinals with a nervy 2-1 win over Olympique de Marseille in the UEFA Champions League. After drawing the first leg nil-nil, United needed to score, and Javier Hernandez scored both of them, but an Wes Brown own goal made for an unnecessary nervous finish, but the Reds advanced through to the next round.

Even though Chicharito scored the two very decisive goals, was it enough for him to earn Man of the Match honors for United?

Another fine performance from van der Sar handled as the competent goalkeeper handled everything thrown his way, and was unlucky to lose his clean sheet on an own goal.

Started due to his height and experience advantage over Rafael, and O’Shea made an encouraging run, but the pass was wayward and succumbed to injury that ended his night.

Still doing well learning his trade, but Smalling continues to struggle without the leadership of Nemanja Vidic by his side.

Not a very good performance, and especially since Brown was the most accomplished defender in the United back-four, which was capped by his own goal.

Captain for the day, but there was no questioning Evra’s main task was to deny the threat of Loic Remy, which, for the most part, he did quite well.

Admirably showed the desire and heart to contribute to the United cause, but Nani was showing some signs of trepidation against, which is no discredit to him or his contributions.

Constantly criticized for being overran by his opponents, but Carrick used composure and completed 93% of his passes against Marseille.

After being criticized for his poor performances over the past month, Scholes put in completely controlled display as he pulled all of the strings.

Played a huge part in the first goal, but it was Giggs’ perfectly timed run and precise pass in the game-winning goal.

Although he is not contributing the amounts that he scored last season, Rooney has looked to have rediscovered the form that put him in the consideration for world player of the year.

Two more precious goals to his name, Chicharito is continuing to endear himself into the hearts of every United supporter in the best possible way.

Came on for O’Shea after 35 minutes, but Rafael only last the same amount of time as he, too, pulled his hamstring, which had added to United’s growing injury list.

Continuing to build up his match fitness, Valencia is showing no ill-effects of being out for nine months.

The third player who Sir Alex had to use at right-back, Fabio got a lucky, but telling touch to deny Marseille prior to them scoring.

For the most part, the Knockout stages in the UEFA Champions League are very difficult, so to win, and score two goals, and against a very defensively disciplined team like Olympique de Marseille will do all the world for Manchester United’s confidence.

Watch video highlights from the game