Manchester United: Month In Review: Away Defeats To Chelsea & Liverpool, But Arsenal Beaten At OT 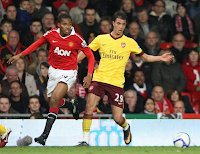 In the first 19 days of the month, United played five must-win matches in three different, and, to be honest, the Reds came through that enduring stretch battered and bruised, but still managed to be marching on in all three competitions.

After losing their first two matches of March, United ended the month on a mini three-game win streak with crucial wins when their backs were completely against the wall. Even though United ended the March at the summit of the Barclays Premier League standings, and lead the league in goals (64), it was a barren month statistically-wise for the Reds.

Javier Hernandez was the club’s leading goal scorer with three goals, but that figure was nearly half of United’s total of seven for the entire month. The statistic of the month was that of the seven goals that United scored only three of them were assisted and the other four were put in following a save by a goalkeeper.

Defensively, United conceded five goals in as many games, but if it was not for the star player of the month, it could very well have been a lot more.

With an injury-hit back-four in front of him, Edwin van der Sar was called on numerous times, and even though he gave up five goals, he was still United’s rock in March. Despite some outcries from his fellow teammates, his mindful manager and adoring fans, van der Sar is retiring at the end of the 2010/11 season, but he showed that he still has the ability to play if he chooses to do so.

VDS’ best performance of the month was against Arsenal in the FA Cup, when he pulled off 11 saves – some of them out of the top draw to dent the Gunners’ hopes of forcing a replay. Even though, United had the big Dutch goalkeeper in top form, it was always going to be a tough start to March, because of the two away fixtures – Stamford Bridge and Anfield – that awaited the Reds.

On the first day of March, United stumbled to another defeat at Stamford Bridge losing 2-1 to Chelsea, which could give the Blues hope that they can overcome the Reds for this season’s title. Rooney put the Reds into the lead after 30 minutes, but one of Chelsea’s big money January signings, David Luiz, equalized just 10 minutes into the second half.

Following massive amounts of controversy surrounding Martin Atkinson’s decisions, or lack there of, Frank Lampard smashed home a penalty to give Chelsea all three points, and Nemanja Vidic received a red card for two bookable offenses. Without their captain, United made the 34 mile trip to Anfield, but it was a very long day for the Reds of Manchester as Liverpool triumphed to a 3-1 victory.

Dirk Kuyt scored three of the most simplest of goals that he will ever score, two in a five minute span in the first-half, but to add some gloss to their miserable day on Merseyside, Javier Hernandez scored in stoppage time to prevent a shutout.

The match though will not be remembered for the dismal result, but for the abysmal actions that transpired in a five minute span at the end of the first half, which was initiated by Jamie Carragher’s reckless tackle that left Nani with an open gash on his leg. Following that result, Ferguson staged a week long media blackout, to refocus his players for the rest of the season, and it seemed to work like a charm.

In the Quarterfinal of the FA Cup, Manchester United triumphed to a 2-0 victory over their long-standing rival, Arsenal, at Old Trafford. Fabio opened the scoring after a wonderfully worked move in the first half, and just minutes after the interval, Wayne Rooney nodded home United’s second goal from close range to seal victory for the Reds.

The North-South Derby win saw the Reds enter the hat for the Semifinal, which they drew their local Manchester rival, City, which means that United will play their three biggest rivals in this historic competition this season. After the confidence building victory, United entertained Olympique de Marseille in the second leg of their Round of 16 Champions League tie, which the Reds nervously eked out a 2-1 win.

Javier Hernandez scored in the fifth minute, which ended Marseille’s five game scoreless streak, to give the Reds the best of starts, and then the young Mexican popped up in a similar position to give United a two goal lead, but own goal by Wes Brown gave the visitors a glimmer of hope, which, thankfully, came to nothing.

That valuable victory, which was Sir Alex’s 100th Champions League win as manager, booked the Reds’ place in the next round of the competition, which was greeted by a mix reaction as the Reds drew English opposition.

It was not only the action on the field that made for a topsy-turvy month for United, but there were a few off-the-field stories that arose to make for an interesting March. First, Sir Alex Ferguson received the largest ban ever given to a manager for “criticizing, or stating the obvious observations, following his remarks of Martin Atkinson not being fair to his team in their loss to Chelsea.

Then came the news that they have a two-legged Quarterfinal affair with Chelsea in the UEFA Champions League – the first time that they have met in the competition since United’s dramatic penalty shootout win in the 2008 UEFA Champions League Final. Finally, some good news was that it was announced that United will be returning to the United States to play a five-match tour, which includes a mouth-watering match against Barcelona.

March was a very pecular month for Manchester United, and hopefully for their hot form brings April showers leads to fruitful flowers in May.