After two weeks off due to international matches, Manchester United starts the final stretch of their Barclays Premier League season with a trip to Upton Park to take on West Ham United. 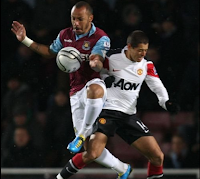 In the Reds last match, they needed a late goal from Dimitar Berbatov to see off their Greater Manchester rival, Bolton Wanderers, 1-0, and they will certainly need that same resilience against the Hammers as well.

United has already faced West Ham twice this season – once in the league and then in Carling Cup – and it was two very contrasting outcomes, which highlights both teams seasons to date.

Because of the Irons very good run of form, they have temporarily exited the relegation zone in the Premier League table, but that is merely on goal differential.

Sitting in 17th place, West Ham has rattled off an impressive four-game unbeaten streak – two wins sandwiched by two draws – but, like the Reds, their lack of killer instinct has resulted being in an unnecessary congested position.

Offensively, the Irons have scored 36 goals in their 30 Premier League matches, but 20 of them have come at Upton Park, which is rank for sixth worst in the league. At the other end of the pitch, West Ham have given up 49 goals, 21 of them at home, which should excite United, who are the Premier League’s best scoring team with 64 goals.

Even though they are struggling in the league, Avram Grant, like he did with Portsmouth last season, has led West Ham to successful runs in both the FA Cup and Carling Cup, and their enjoyment in latter came at the expense of United.

Back at the end of November, and on a blistering cold evening in west London, United slipped to an embarrassing 4-0 defeat to West Ham United in the Quarterfinals of the Carling Cup.

Former United youngster, Jonathan Spector, scored two first-half goals to shock his former employers, but the Reds were then subjected to even further shame as Carlton Cole bagged a brace after half-time to seal West Ham’s place in the next round of the competition.

The shocking loss to the Hammers not only ended United’s chances of defending their back-to-back Carling Cup titles, but it also brought their 29 match unbeaten run to an abrupt end, which should mean that the Reds should have revenge on their mind heading into Saturday’s battle.

Normally international breaks disrupt the flow and form of United, but this recent one came at the ideal time to give some of the injured players an extra two weeks of rest. However, Sir Alex Ferguson will still be short in some areas – especially at right-back as Rafael, John O’Shea and Wes Brown all picked up injuries in the last two games for United, which could mean that Fabio will get the start.

There are other defensive worries with both Rio Ferdinand and Nemanja Vidic missing out on United’s win over Bolton, but the latter will hopefully be back to face the Hammers. Manchester United rarely enjoy their trips to London, but they should have enough fire power in attack to overcome any obstacle that West Ham United throws their way.