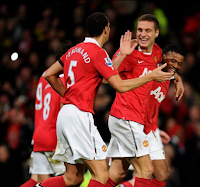 Sir Alex Ferguson has hinted that Rio Ferdinand could make a shock return from his nagging calf injury, which would boost Manchester United’s title charges. Ferdinand has been out of action since he pulled up lame in the warm-up for United’s match with Wolverhampton two months ago, and it comes as no surprise that United has struggled in his absence.

With United’s attack now flowing with options, Sir Alex would certainly welcome any sign of improvement on the other end of the pitch on the injury front.

The center-back, who was unfairly stripped of his captaincy from the England national team for no legitimate reason, has missed the last 11 matches for United, but, hopefully, Ferdinand will be in contention for the Reds’ next Barclays Premier League match against Fulham.

During Rio’s injury layoff, the Reds have only been able to keep five clean sheets and have conceded 10 goals in the process, but that cannot only be blamed on his own injury situation. Even though Rio’s constant injury crisis has handicapped Ferguson at times, his preferred center-back partner, Nemanja Vidic, has missed a couple games through injury and suspension, himself, over the last month.

The only constant in defense in the last 11 matches has been Chris Smalling, but the young defender, who is filled a lot of promise, has, unexpectedly, experienced growing pains along the way. Like Javier Hernandez in the United attack, Smalling has been a breath of fresh air with his rise to fame in such a short time, and he has handled the pressure of playing on the world’s biggest stage ever so well.

The other young replacement, Jonny Evans, has struggled to live up to the early signs of potential that he were laid out for him, but, to be fair, he is still a viable option for Ferguson and will be available for the UEFA Champions League encounter with Chelsea.

Evans, a bit unfairly, will miss two more Premier League matches because of his fair, unfortunate challenge on Bolton’s Stuart Holden, which makes it imperative for Ferdinand to be restored for the Fulham match. However, it is not only central defense that is the concern, because Ferguson has seen three right-backs succumb to injuries, two of them to hamstrings, in a span of 135 minutes.

First, John O’Shea pulled up lame on 35 minutes against Olympique de Marseille, then, coincidentally, his replacement, Rafael, only lasted the same amount of time, and, finally, Wes Brown was forced off at halftime against Bolton. For the second half of the match with the Trotters and then against West Ham United, Ferguson resorted to calling in his first choice right-backs’ twin, Fabio, and he has done everything but disappoint.

The person who occupied that role prior to him, Ryan Giggs, was forced to play left-back against the Irons, and he did one hell of job tracking runs and created the fourth and final goal with a driving run forward. The injuries, and suspension, that has decimate the Manchester United back-four is highlighted by the inclusion of Oliver Gill, the son of the club’s Chief Executive, David, so Sir Alex Ferguson will do anything in his power to make sure that he has more options for the season’s run-in.