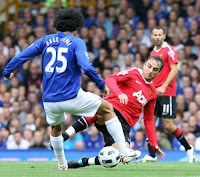 After failing to win either of their last two matches, Manchester United will look to take out their aggression against Everton at Old Trafford and hopefully take a huge step towards the Barclays Premier League title.

Disappointingly, the Reds put in a very unfocused, lackluster display in their goalless draw at St. James’ Park against Newcastle United just days after being beaten by City in the Semifinals of the FA Cup.

Everton, who everyone predicted to be challenging for a top four spot, struggled mightily in the first part of the season, but the Toffees are pushing for a top six finish, and will offer another stern challenge for United.

The People’s Club, as the local Evertonians like to refer to their club, are riding a seven game unbeaten streak have stormed up to seventh place, and are two points behind their bitter local rival Liverpool.

Despite being faced with a shoestring budget and constant injury problems, David Moyes has worked wonders getting his team back in a respectable position in the standings. The Glaswegian gaffer has been able to rely upon some of his seasoned professionals, like Phil Neville and Sylvain Distin, to help lead some of the less experienced players cope with the pressure of the season’s run-in.

Because of injuries to key players, Moyes has had to call on the likes of Magaye Gueye and Apostolos Vellios to fill during their last two games, so the Everton boss puts an extra importance on the value of leadership from his senior players, which could be key against United.

Since the middle of February, Everton have only conceded more than one goal on two occasions, and have posted back-to-back shutouts in their last two matches. Over the course of the season, the Toffees have conceded 41 goals overall, which ranks 7th in the Premier League. Away from Goodison Park though, Everton are a very tough team to score against as they are tied for second allowing 19 goals against.

Offensively, Everton has tallied 47 goals, which is tied for sixth best in the league, but that is 23 goals off of United’s pace. In spite of getting shutout against Newcastle, the Reds have amassed a Premier League-best 70 goals. Away from home, the Toffees have scored 19 goals, which is two less than Dimitar Berbatov’s league-leading total, alone. However, three of those 47 goals that the Blues have given up came back in early September against United.

In disappointing fashion, United inexcusably threw away two points at Goodison Park as they conceded two goals in stoppage time in the 3-3 draw with Everton.

Steven Pienaar, who transferred to Tottenham in January, scored the opening goal five minutes before halftime, but that lead lasted a mere tree minutes as Darren Fletcher, who has missed the last month of the season with a virus, leveled the score. The momentum definitely shifted in United’s favor and goals from Nemanja Vidic and Dimitar Berbatov gave them a commanding two-goal lead, but two goals in stoppage time through Tim Cahill and Mikel Arteta gave the home team an unthinkable point.

Wayne Rooney, who was facing both a professional and personal whirlwind, was left out of the United squad altogether, because Sir Alex Ferguson wanted to protect him and the club from a certain media onslaught.

Ahead of Sir Alex confirming so, Paul Scholes, Fletcher and Owen Hargreaves are the only players that are unavailable for this match through suspension, illness and injury, respectively. The Gaffer, who served his final match of his five-match ban, rested Berbatov and Rio Ferdinand against Newcastle, but both of them could feature from the start against Everton.

With just five games remaining, Manchester United can ill-afford to drop any points, especially at Old Trafford, so this should be sure-fire Barclays Premier League match with Everton.