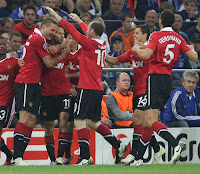 At the Veltins-Arena, Manchester United cruised to a 2-0 win over Schalke 04 in the first leg of their UEFA Champions League Semifinal.

Ryan Giggs and Wayne Rooney scored the two crucial away goals for the Reds, which puts them in a very good position for the return leg and in pole position to advance to the final at Wembley in a month’s time.

Rooney registered an assist to go along with his goal, but was it enough to get him Man of the Match honors for United?

Called on a couple of times to make key saves, but other than that van der Sar had a relaxing day breaking another record.

Book for a clumsy challenge, but other than that Fabio had a very comfortable night defending and should have opened the scoring.

At complete ease throughout, Ferdinand was never troubled by his long-time nemesis Raul – or any of the other Schalke attackers, for that matter.

Given a rest at the weekend, Vidic was a spectator for much of the match, but going forward he showed that he can be a little creative as well.

Unlucky not to have scored late on, Evra was never troubled in defense and offered an option going forward, like he normally does.

Powered down the right wing with authority, Valencia was a perpetual thorn in Schalke’s side.

Had a field day in the midfield picking any pass that he wanted, and Carrick also made timely interceptions when Schalke tried to mount an attack.

After being rested in the last two matches, Park continued to show that he never goes missing with a typical robust performance.

Missed a trio of terrific chances, but Giggs eventually became the oldest player to ever score in the Champions League.

Unlucky not to have scored a goal of his, but Hernandez eventually had a say in the final outcome with a great assist to Rooney.

Full value for his goal and assist, but Rooney also showed the hunger and passion of a natural-born leader of example against the Miners.

With acres of space to operate and to pick any pass of his liking, Scholes was unlucky not to have registered an assist after picking Rooney out with a sublime pass.

Not required to be as influential as he was at the weekend, so Anderson allowed Carrick and Scholes to dominate the midfield battle on their own.

A short cameo, but good run out in an unfamiliar position as Nani was still was able to torment the Schalke defenders.

By far the best their performance away from Old Trafford all season long, and the way that Manchester United annihilated Schalke 04 can only propel them to bigger and better things.