Would £40 million Sneijder Be Worth It?

The latest reports surrounding Manchester United’s long term target Wesley Sneijder is that the United manager Sir Alex Ferguson will get his man as long as the Glazer family, the owners of Manchester United are willing to fund a big money move. Accor… 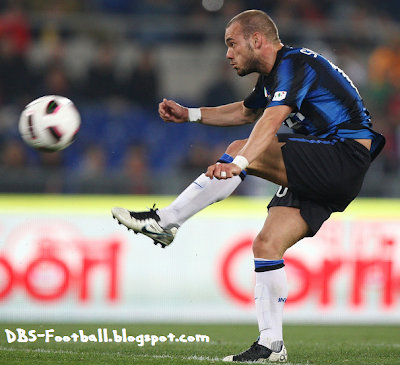 The latest reports surrounding Manchester United’s long term target Wesley Sneijder is that the United manager Sir Alex Ferguson will get his man as long as the Glazer family, the owners of Manchester United are willing to fund a big money move. According to an United insider, “Sir Alex wants the player”, and will need to convince the unpopular American owners that the investment would be worth their while.

With the figures being quoted, it would take some convincing, as Sneijder, who only recently signed a long term contract with Inter Milan, is valued at £40 million by Inter Milan, and is on wages of £170,000 a week at the San Siro. Due to Britain’s high tax rates, United would have to exceed those wages by some way to match his current net wage payment, taking him above Wayne Rooney’s wages of £200,000 a week.

The Manchester United insider said: ‘It’s up to the owners now. Sir Alex wants the player — it’s just a matter of agreeing to the wage demands.”

Sir Alex Ferguson sees Wesley Sneijder as a Paul Scholes replacement, and there is no doubt the 26 year-old has the quality to add to the United midfield, but the question is, would the huge investment be worth it? Wayne Rooney seems to have discovered his best position just behind the striker who is Javier Hernandez more often than not, so where would Rooney play if Sneijder were to come in and take that position?

Nevertheless, Sneijder would be an excellent addition to the side, with his versatility and ability to work with both feet. His creativity would be welcome in the midfield, and I’m sure that as Sir Alex Ferguson is trying to buy him, then he has a position in mind. The problem however, remains the money. It is a huge amount – an amount that Manchester City, United’s rivals would be able to afford with ease.

City seem intent on going for any player that United are reportedly interested in, but this is one that City will not be able to get in on, as the player has made it clear in the past that the only club in England he would want to join would be United:

“The Premier League, in terms of top clubs, is the strongest in the world, and it would be nice to finish my career saying I have played at the very top in Spain, Italy, and England. There is not many who can say they have done that, and if that does happen for me I would only want it to be with Manchester United.”

With other reports stating that Sir Alex Ferguson will be given a huge £100 million transfer fund in the summer, the whole issue of the Glazers needing convincing is out of the window. A £40 million fee and then the £200,000 wage every week is a big price to pay, so the question is, is Sneijder worth it?