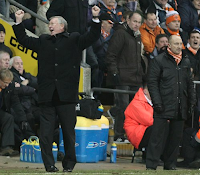 After wrapping up the Barclays Premier League title last weekend, Manchester United now face Blackpool at Old Trafford in the final match of the 2010/11 season.

The Reds only had to secure a point against Blackburn, which they did just that earning a 1-1 draw at Ewood Park, but, meanwhile, the Seasiders staged an impressive 4-3 win over Bolton to set up dramatic final day of the campaign.

Even though United already knows their fate, Blackpool’s Premier League survival hinges on this match, because they are one of five clubs that have a chance of playing in the npower Championship next season, so it should prove to be another entertaining match between these Lancashire rivals.

The Seasiders’ fortunes might have been eased a little bit if the result from the first meeting did not suffer from the old football cliché, “a tale of two halves.”

After having the match originally postponed, amazingly, United overcame a two-goal deficit and earned a dramatic 3-2 win at Bloomfield Road.

Former United youngster, Craig Cathcart, came back to haunt his former employer by heading Blackpool into an early lead, and then Campbell gave them a shock two goal advantage on the stroke of halftime. However, in a 16-minute span that lead was completely reversed as Dimitar Berbatov chipped in with two goals and Javier Hernandez scored the other and that gave the Reds a vital three points.

Since that result, which was one of the seven games that helped United to their 19th title, Blackpool have only won two of their 14 matches – the recent result against Bolton and an impressive 3-1 victory over Tottenham. In total, the Tangerines have only amassed 10 points out of a possible 42, which is not good enough to remain in the top flight of English football. Luckily for them though, teams around them have dropped points, which has allowed them a fighting chance on the final.

Because of their inferior goal difference with Birmingham City, the Tangerines are currently in the relegation zone in 18th place. Depending if they get all three points and the other club’s results around them, Blackpool has the potential of finishing as high 15th place.

Like Hull City before them, the Tangerines started the season off wonderfully well and were even ahead of United in the league standings at one point during the season. The season was in its infancy state then, and, for them, it has been a slippery slope over the last half of the season, and the Reds are currently 38 points in front of Blackpool – one less than their season total.

There are a couple of reasons as to why the Seasiders are in the relegation dog fight, because their season can be describe as, “live by the sword, die by the sword.”

Blackpool simply plays an end-to-end, attack-minded style of football that is admired by some of other Premier League managers, and full credit needs to be given to the outspoken Ian Holloway for never wavering from his philosophy.

That style of play has seen the Seasiders score 53 goals in their debut season in the Premier League, which is just 21 off United’s league-leading total. DJ Campbell is the club’s leading goal scorer with 13 goals, but Charlie Adam, who has been admired by quite a few of the managers in the top-flight – including Sir Alex Ferguson, closely follows him.

What equation that Holloway, who should be up for manager of the year, has failed to get correct is at the back, defensively. Heading into the match, Blackpool have failed miserably trying to keep the ball out of their own net, and have conceded a league-worst 74 goals – which is 39 more than United’s total. To further heighten their worries of remaining in England’s top division, the Reds are the best scoring team at home, with 45 goals scored and have an equally impressive goals against record, 10, at Old Trafford.

Away from Bloomfield Road, Blackpool have given up 37 goals, which is two goals shy of the worst total in the Premier League. Even though they have given up so many goals away from home, the Seasiders still have tabled exactly the same amount of wins on the road as United have – five. Their 19 points away from home is the best total out of any of the five teams battling for the those three lucrative league spots for next season.

Besides Blackpool needing the win, the other major talking point is whether or not Sir Alex will select a strong starting XI for this match. The United manager has his focus on the club’s next match – the 2011 UEFA Champions League Final against Barcelona – so, without any doubt, he will be making changes to his line-up. Because of the lofty expectations set forth by him, the club and the supporters, one thing that should never be brought into question is the integrity of Ferguson or Manchester United.

The players who are selected for this match will most certainly put in a performance, because they know that if they do not, they will risk the chance of not making the squad for the match at Wembley in a week’s time.

No matter the result, Manchester United are champions of England for a record 19th time, but even with a what some will call a weakened team, they will prove to a formidable road block for Blackpool’s hopes of staying in the Barclays Premier League for another season.