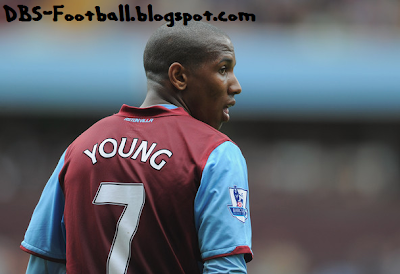 Manchester United look set to announce the signing of Aston Villa’s Ashley Young very soon. It is thought that the player has expressed his desire to join United, while Villa’s American owner, Randy Lerner will not stand in the way of a move now that his asking price has been met. The Express said: Villa do not propose to fight to keep Young and Lerner will give him the green light to leave providing United meet his asking price (£16million).

But what will Young’s signing mean for Manchester United? Well, the arrival of a new player can often mean a change in tactics and formation. Likewise, the development of a player’s different talents can alter the team, a prime example being Cristiano Ronaldo’s switch from the right wing to a central position in his latter years at United. This unfortunately meant that Wayne Rooney, United’s main striker at the time, was pushed out wide on the left, restricting his happiness and joy in front of goal. He was turned into a provider for Ronaldo, rather than the goalscorer that he naturally is seen to be.

The immediate question is then, what is Ashley Young’s best position? Defining players’ “best” or favoured position often proves a tough task, especially among the most versatile of players, and recently, Young has been shown to be no different. The 25 year-old is seen naturally as a winger, primarily because he made his name in that position for Villa and was deployed on the wing for the majority of the time he was at Villa under Martin O’Neil. However, since Gerard Houllier took the reigns up at Villa Park, things have changed.

The Frenchman, who has had to step down due to health issues, did not win over the Villa fans himself very well, but he did let Young loose in the middle, just behind the striker, Emile Heskey. Wingers that move inside must be strong, quick, tricky, good on the ball, and possess the ability to spot a pass that other couldn’t. They need to be able to create goals for the players around them.

This season, Wayne Rooney of Manchester United excelled in this role, mainly when his form picked up towards the end of the year. The goals were provided by him for Dimitar Berbatov and Javier Jernandez, who occupied the predatory role up front, while Rooney played just off of them in various games, to provide the passes and creation of chances for the strikers. It worked brilliantly thanks to Rooney’s huge talents in this area of the pitch, and he ended up providing 16 assists in all competitions, 11 in the Premier League. 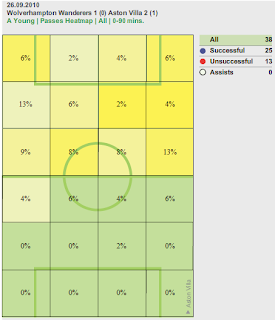 Ashley Young came narrowly behind Rooney with 10 Premier League assists, many of which were when he started in a central role. However, as can be seen in the heat map diagram of Young’s positioning during a match in which he started just behind the striker, he tends to drift to the flanks, as he is given the “license to roam”.

I wonder then, is Sir Alex Ferguson signing Ashley Young to deploy on the wing? It seems odd if he is, as the right and left both seem to be filled capably by Antonio Valencia and Nani, as well as the ever energetic and hugely effective Ji Sung Park. Could it be that Sir Alex is buying Young to deploy in a central role behind the striker, who many believe will be Javier Hernandez?

This may be the case, and if Sir Alex were to use this tactic, then he could perhaps play Rooney beside Young behind the strikers when United look to attack in force, or, Ferguson would have to choose which player to play behind the striker; Young or Rooney.

The following is simply a stab in the dark of what a future Manchester United team may look like in an extremely attacking state: 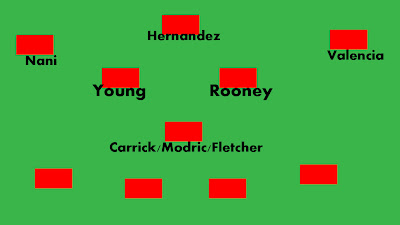 This formation takes advantage of both Young’s and Rooney’s creative talents whilst allowing the two settled wingers wreak havoc and provide for the lone striker Hernandez. In this state, it leaves very little in midfield, with only one central midfielder fighting the battles in defence. If the rumours surrounding Modric prove to be true, which is now very unlikely, Modric can be deployed in the middle, but he should be more of an attacking, creative threat further forward.

Taking into account the possibility that Nani could be sold, Young may be being bought to be played out on the left in a straight swap, creating better balance in the side: 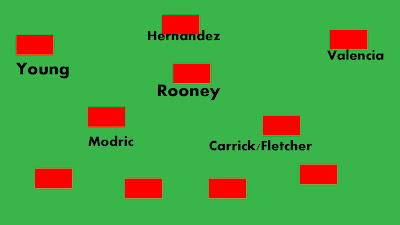 Indeed, we will have to see what Sir Alex Ferguson’s intentions in signing Young are:

Ashley Young himself knows which position he prefers, saying earlier in the year that he has loved playing centrally, like he did at the start of his career at Watford:

“I was a striker all the time when I was younger, even at Watford. I am delighted to be playing there again. I have loved every minute. It gives me more freedom to go and get the ball and join in.”

“Hopefully I will continue playing there at club level and impress the England manager. I have always wanted to add goals to my performances. As a second striker I have been getting in the box more often and having the chance to shoot. Hopefully I can increase my goals tally.”