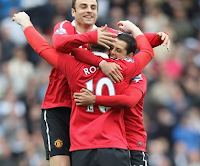 In the final installment of a four-part series, The United Religion rates how each of Manchester United forward’s contributed to the success of the club during the 2010/11 season.

United led the Premier League with 78 goals scored, but they also tallied a further 33 in other competitions this season, and here is how each striker rated.

A lot of fans never appreciated his worth until this season and Dimitar showed the world what he is capable of by winning the Barclays Premier League’s Golden Boot Award, scoring 20 goals. Berbatov etched his name in the United record books and the supporters’ memories by notching a hat-trick against Liverpool, but he also registered two more treble later in the season, including five against Blackburn. Although he only made two starts in the last 20 games, Berbatov still featured 42 times for the club this season – keeping a 0.50 goals-to-game ratio.

Nobody knew what to expect, if anything, from Javier, but yet all he did was score 20 goals in his debut season. A shock 6 million signing from Mexico, Hernandez went for the world of the unknown to a world renowned finisher in just nine short months. Chicharito, as most people call him, scored so many timely goals that proved pivotal in the destination of this year’s trophy, but it also landed him the Sir Matt Busby Player of the Year Award.

The 19-year old Italian has quickly become the forgotten forward amongst those at Old Trafford, but Federico served his purpose before going out on loan. Macheda scored a thunderous effort against Aston Villa back in November, which started their dramatic comeback. However, his other 11 appearances did not offer all that much, which is why Sir Alex allowed him to go to Sampdoria on loan for the second half of the season, in hopes to gain valuable first team experience.

To every United supporter’s satisfaction, Michael earned his first Premier League winners’ medal in his second season with the club – after he failed to achieve that same feat in his eight years with Liverpool. Due to his inability to stay healthy, Owen only made 16 appearances this season, but he did, however, score five goals in those matches.

A tale of two seasons would be the best way to describe Wayne’s topsy-turvy time this year. After sorting his head out and performing a dramatic u-turn over his highly-talked about contract dispute, Rooney came back into good graces with most of the United supporters. Not only did he score that cracking goal to win the derby, but Rooney scored some other important goals for the club including the decisive penalty that won determined the outcome of the Premier League title and three away goals in each the quarterfinal, semifinal and final of the Champions League. In all, Rooney tallied 16 goals in 40 games for United this season.

Even though Manchester United did not win the lot of trophies again, Sir Alex Ferguson had four top goal scorers at his disposal in 2010/11 that scored 63 goals amongst them.