Liverpool look to avoid an upset as they face Mansfield in the 3rd round of the FA Cup on Sunday. Here’s a preview, team news, likely line-ups & predicted score

Liverpool will look to avoid an upset as they face Mansfield Town at Field Mill in the 3rd round of the FA Cup on Sunday.

The Reds will arrive in Nottinghamshire knowing they’ll face a side searching for a giant-killing in one of the glamour ties of the round.

The Premier League giants are clear favourites for the game but will have to guard against complacency against their lower league opposition, with Mansfield currently sitting ninth in the Blues Square Bet Premier Division.

Brendan Rodgers is expected to make several changes for the tie with key players such as Luis Suarez, Steven Gerrard, Daniel Agger, Martin Skrtel and Pepe Reina all likely to be rested.

New signing Daniel Sturridge should start his first game since making the move from Chelsea last week and he’s likely to replace Suarez up front, with Suso and Oussama Assaidi likely to be in support on the flanks.

Mansfield will name their strongest team in a bid to cause an upset, with boss Paul Cox relying on top-scorer Jake Speight to work the Liverpool defence. 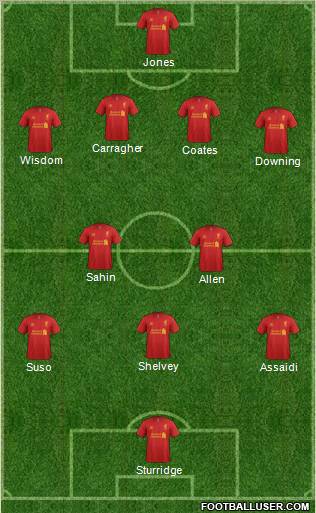 Liverpool are obviously clear favourites for the game but they should be experienced enough not to underestimate their lower-league opposition. Mansfield are on an excellent run having lost just once in their last 12 games so should be full of confidence heading into the game. However, no matter what team the Reds put out they should have far too much quality for the Stags. Mansfield 0-3 Liverpool