Liverpool take on Oldham on Sunday at Boundary Park with a place in the fifth round of the FA Cup at stake. Here is a preview with team news for the big game.

Liverpool take on Oldham on Sunday at Boundary Park with a place in the fifth round of the FA Cup at stake.

The Reds do battle with Oldham for the second year running having thrashed the League 1 side 5-1 at the same stage of the FA Cup last season, so the Latics will be out for revenge this weekend.

However, they will face an in-form Liverpool side who have scored 17 goals in their last six league games to put themselves within touching distance of the top-four. In contrast, Oldham boss Paul Dickov’s side sit 19th in League 1 and are without a win in their last eight games, so will have their work cut-out to get a positive result on Sunday.

Brendan Rodgers is expected to rotate his squad with the Liverpool boss likely to have one eye on Wednesday’s vital Premier League clash with Arsenal.

Steven Gerrard, Daniel Agger, Lucas Leiva and Luis Suarez are expected to be rested with the likes of Jonjo Shelvey, Suso, Jack Robinson, Jamie Carragher and Fabio Borini given some game time.

Rodgers must also decide how best to utilise new signing Daniel Sturridge as the former Chelsea man looks to make it four goals in four games since moving to Anfield.

Pepe Reina has been ruled out through injury, Glen Johnson is also a major doubt while the game will come too soon for Jose Enrique. 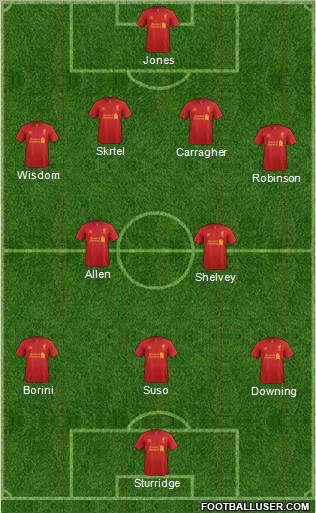 No doubt last season’s thrashing at the hands of Liverpool will be playing on the Oldham players minds, but they’ll do well to prevent a similar score-line on Sunday. We can see the Reds winning this one easily again. Oldham 0-3 Liverpool