Chelsea take on Rubin Kazan in the second leg of their Europa League quarter final tie on Thursday night holding a 3-1 lead from the first leg. Here’s a preview.

Chelsea take on Rubin Kazan in the second leg of their Europa League quarter final tie on Thursday night holding a 3-1 lead from the first leg. Here, guest blogger ‘The Chelsea FC‘ previews the big game:

Chelsea head into the game after a 3-1 victory in the first leg at Stamford Bridge last week when Fernando Torres hit a brace marking his 17th and 18th goals of the season for the Blues. Victor Moses was also on target but Rubin Kazan got a goal back after John Terry was adjudged to have hand-balled in the area and Natcho scored from the penalty spot.

Chelsea are in good form after some crucial wins against Manchester United in the FA Cup quarter finals, Rubin Kazan in the first leg and latest 2-1 win over Sunderland which ensured Chelsea move back into third spot in the race for Champions League qualification. Another win here will guarantee us a place in the semi-finals of the Europa League and a match against FC Basel or London rivals Tottenham Hotspur.

From the time Chelsea won 3-1 against Rubin Kazan there has been a lot of talk that the ‘game is done & dusted’ and ‘Chelsea are through to the semi-finals’ but HOLD ON; it ain’t that easy, is it? Its not like the 3-1 win was away from home; Rubin Kazan have a crucial away goal and everyone knows how priceless that can be.

Chelsea need to play their natural game and can’t take this tie lightly (as it is being projected in most of sections of the media). There will be tired legs going into the game after a grueling fixture list but we’re in good form and need to carry forward the same momentum and not go there and ‘PARK THE BUS’.

Benitez knows this is another opportunity to bring home Silverware home for Chelsea; given the fact he wont be there after this season he will want to leave on a good note by bringing home either, if not both, FA Cup and Europa League.

An early goal by Rubin Kazan and Chelsea could find themselves defending in numbers, so its important that we go ahead and play in an attacking manner. Kazan are more than capable of doing some damage in the final third with their in-form striker Jose Salomón Rondón, a 23-year-old Venezuelan who has scored five times so far in Europa league this season, so Terry and Ivanović or Luiz will need to be at their best at the back to contain him.

With one eye on Sunday’s FA Cup semi-final against Manchester City, Benitez will look to balance the team to ensure the players are not over-burdened, which till now he has managed efficiently. Whether he goes with the “three Musketeers  (Mata , Oscar and Hazard) remains to be seen but an early goal from Chelsea should tilt the tie very much in our favour. But its our defense which will need to be at it’s best. If we can things tight and keep a clean sheet then we’ll be able to cruise through to the semi-final’s and not over-exert ourselves ahead of Sunday’s crucial tie against Manchester City at Wembley.

Rubin Kazan themselves are also in good form in Russia, remaining undefeated in their past four games and sitting in fourth place in the league. They draw 0-0 with Kuban at the weekend, who themselves are going strong in sixth. That draw comes on the back of impressive wins against Lokomotiv Moscow and Zenit St. Petersburg meaning they have not lost in domestic competition throughout 2013.

Chelsea will be without Gary Cahill and Ashley Cole both out because of knee surgery and a hamstring injury respectively. Striker Demba Ba is cup-tied and wont be able to participate in this one having already played in the Europa League for Newcastle this season.

Ryan Bertrand is also out after picking up a virus so 18-year-old Nathan Aké has been called into the squad and may have to start at left-back. 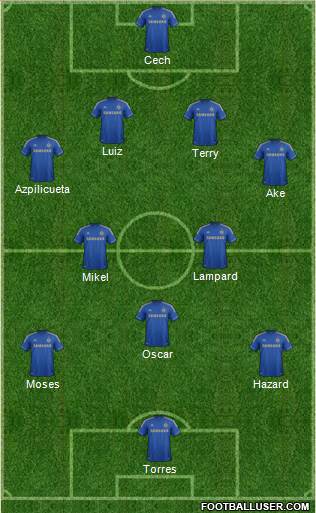