Man Utd take on Cardiff City on Saturday evening looking keep alive their faint hopes of finishing in the top four. Here’s our predicted line-up for the game.

Manchester United take on Cardiff City on Saturday evening looking keep alive their faint hopes of finishing in the top four. Here’s our predicted line-up for the game.

United should be going into the game on a high following their mid-week heroics, coming from 2-0 down to beat Olympiakos 3-0 in the second leg to qualify for the quarter finals of the Champions League.

It was a rare highlight in what’s otherwise been a disappointing season, so David Moyes would be wise to stick with much of the team that served him so well on Wednesday night.

Nemanja Vidic is suspended after being sent off against Liverpool last Sunday and with Jonny Evans and Chris Smalling still injury doubts, Rio Ferdinand may have to play his second game in four days. Otherwise, the back five should remain in tact.

The ever-green Ryan Giggs put in a virtuoso display against the Greeks and although his 40-year-old legs haven’t got as many miles left in them as they used to, I’d start him again this weekend as he was outstanding alongside Michael Carrick. Plus, he’ll have the added incentive of playing against his boyhood club.

Danny Welbeck was also very good in midweek and I think his hard-working performance will see him retain his place in the attack, and he should be joined by Juan Mata who could come in for Antonio Valencia – who took a nasty knock to his eye last time out.

Robin van Perise was stretchered off late on after taking a kick to his knee, but Moyes doesn’t think it’s anything serious and I’m sure United will do all they can to get the Dutchman leading the attack with Wayne Rooney providing support.

Here’s the team I think we’ll see Moyes put out this weekend: 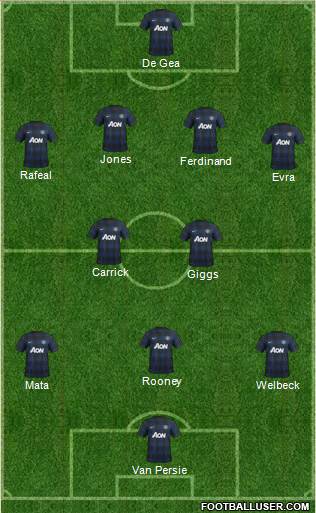