Chelsea take on Bolton Wanderers at Stamford Bridge on Wednesday night in the third round of the Capital One Cup. Here’s a preview with team news and prediction

Chelsea take on Bolton Wanderers at Stamford Bridge on Wednesday night in the third round of the Capital One Cup.

The Blues warmed up for the game with a hard fought 1-1 draw away at title rivals Manchester City on Sunday afternoon. Andre Schurrle looked to have won it before Chelsea legend Frank Lampard came off the bench to score a late equaliser and deny his former side a crucial three points.

It was still a positive result for the West Londoners as City failed to make up any ground in the title race and they maintain a three point lead at the top of the Premier League table after an impressive start to the season.

The Capital One Cup may not be a top priority for Jose Mourinho but he’s still going to be keen to do well in any competition he’s in and Chelsea are the heavy favourites to progress tonight despite the fact they are expected to field a ‘weakened’ side.

Mourinho is likely to take the opportunity to rest a number of key men with the likes of Thibaut Courtois, John Terry, Cesc Fabregas, Eden Hazard and Diego Costa all likely to be given a well-earned breather.

The Portuguese coach will have to make do without the services of Ramires after the midfielder picked up an abductor injury at the weekend. John Obi Mikel and Nathan Ake could come in to the midfield.

Petr Cech is expected to make his first start of the season while Kurt Zouma could also come in to the back four to make his full debut for the club.

Andre Schurrle and Mohamed Salah should start in attack, while Loic Remy could make his debut up front if he’s selected ahead of Didier Drogba.

As for Bolton they are likely to hand a debut to Chris Herd following his loan move from Aston Villa. Jermaine Beckford, Mark Davies, Neil Danns, Max Clayton, Darren Pratley and Medo Kamara could all be given a run-out. 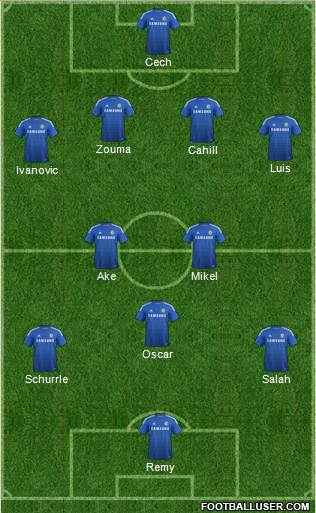 Oscar: The Brazilian playmaker didn’t feature at the Etihad so he should be well rested and Chelsea will be looking to him to be the creative focal point with Fabregas left out.

Chelsea 3-0 Bolton: Despite making wholesale changes, Chelsea are still capable of putting out an impressive side which should easily be able to deal with the Wanderers on home soil.