Liverpool will be looking to avoid an upset when they take on AFC Wimbledon in the third round of the FA Cup. Here’s the side Brendan Rodgers might select:

Liverpool will be looking to avoid an upset when they take on AFC Wimbledon in the third round of the FA Cup on Monday night. Here is the side I think Brendan Rodgers will select:

Goalkeeper: Rodgers is expected to stick with Simon Mignolet as Brad Jones is still out with a thigh injury.

Defence: Dejan Lovren could be set for a comeback with Rodgers likely to make changes to his defence. Martin Skrtel is also expected to come back in having been suspended for Thursday’s 2-2 draw with Leicester City with Kolo Toure given a breather.

Midfield: Steven Gerrard is likely to be rested which could see Emre Can move into midfield alongside Lucas Leiva. Jordan Henderson is another who could get a breather so Javier Manquillo may come in on the right with Alberto Moreno keeping his place on the left.

Attack: Mario Balotelli is in contention and could start up front with Raheem Sterling given a well-earned rest – although Rodgers may opt to go with Rickie Lambert ahead of the out-of-form Italian. Philippe Coutinho and Adam Lallana should both be rested which could open the door for Fabio Borini and Lazar Markovic to start in attack. 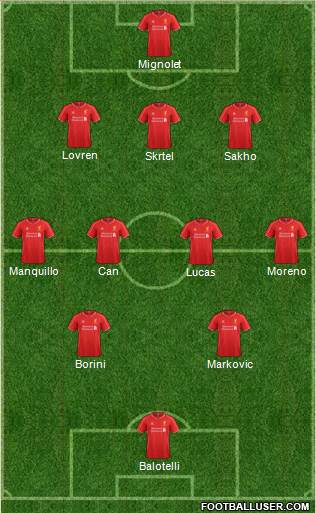