Chelsea will be looking for a positive result when they face Liverpool in the first leg of their League Cup semi final. Here’s a predicted team for the Blues.

Chelsea will be looking for a positive result to take back to Stamford Bridge when they take on Liverpool in the first leg of their Capital One Cup semi final tomorrow night. Here is the side I think Jose Mourinho will select:

Goalkeeper: Thibaut Courtois was left on the bench for the second consecutive game on Saturday as he continues to nurse a finger injury and it looks as though Petr Cech will once again start between the sticks on Tuesday.

Defence: Mourinho was forced into making one change at the back at the weekend with Cesar Azpilicueta ruled out after picking up a knock, so Filipe Luis will continue at left back. It’s unlikely the Portuguese coach will opt to shake things up so I’d expect the same back four to start tomorrow with Luis starting alongside John Terry, Branislav Ivanovic and Gary Cahill.

Midfield: Cesc Fabregas could be moved into a more advanced role if Mourinho wants to add a more defensive-minded player alongside Nemanja Matic in front of the defence, and I think John Obi Mikel could be the man he turns to.

Attack: With Fabregas deployed further forward we could see Oscar rested despite his two-goal display at Swansea, while Ramires may also come in for Willian to give them even more protection to combat the dangerous Raheem Sterling down that side. Eden Hazard and Diego Costa are almost certain to keep their places in the team. 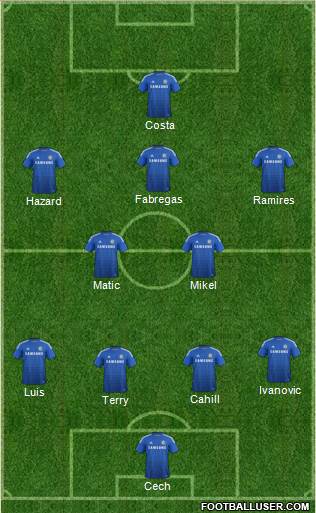