Tottenham take on Qarabag in the Europa League this evening. Here’s a preview with team news, likely line-up, betting and predicted score for the game.

Tottenham Hotspur will look to kick off their Europa League campaign with a win when they take on Qarabag at White Hart Lane this evening.

Spurs have endured a difficult start to the new Premier League season and only picked up their first win with a narrow 1-0 victory over Sunderland on Sunday afternoon.

The priority for the North Londoners this season will be to get themselves back in to the top four so Mauricio Pochettino will be hoping to give some of his fringe players a taste of first team action in the Europa League.

That isn’t to say Totenham won’t take the competition seriously though as the winners do qualify for the Champions League next season but they’ll have to improve upon last year’s display that saw them crash out to Fiorentina at the last 32 stage.

Qarabag dropped into the Europa League after losing to Celtic in the Champions League qualifying rounds but the Azerbaijan champions put in an impressive display to see-off Young Boys to make the group stages for the second consecutive season, so Spurs might be in for a tougher night than expected.

The hosts will be without influential midfielder Ryan Mason after he injured his knee while scoring the late winner against Sunderland on Sunday.

The England international therefore joins Moussa Dembele, Christian Eriksen and Nabil Bentaleb on the sidelines with the trio all ruled out through injury. 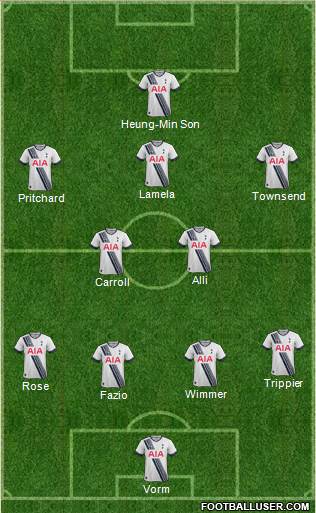 Tottenham 2-0 Qarabag: The visitors have only managed to score three goals in their six Europa League games to date while Tottenham have lost just once in their previous 19 group stage matches, so we can only see a home victory here tonight.

Spurs are the heavy 4/11 favourites to win the game but Football-Talk can get you enhanced odds of 3/1 on a home win. My prediction of 2-0 is available at odds of 9/2, and I also like the look of Erik Lamela opening the scoring at 11/2. If we combine those two bets in a score cast then we get very tempting odds of 16/1. Surely that’s got to be worth a few quid?