Liverpool will look to get back to winning ways when they take on West Brom at Anfield on Sunday. Here is the side I think the Jurgen Klopp will pick.

Liverpool will look to get back to winning ways when they take on West Bromwich Albion at Anfield on Sunday afternoon. Here is the side I think the Jurgen Klopp will pick.

Goalkeeper: Simon Mignolet is expected to keep his place in goal ahead of Adam Bogdan.

Defence: Klopp is set to make some changes to his back four with Martin Skrtel expected to come back in to the side in place of Kolo Toure after being rested for the 0-0 draw at FC Sion.

Alberto Moreno is also set for a recall after being left back in Merseyside to rest last night while Nathaniel Clyne should keep his place at right-back. With Mamadou Sakho still out injured, Dejan Lovern will continue in the heart of defence.

Midfield: Lucas Leiva was also afforded the night off on Thursday so the Brazilian should resume his midfield role alongside James Milner. Jordan Henderson made a successful return to the starting eleven last time out but we’ll have to wait and see whether Klopp decides to start him twice in four days or go with Emre Can or Joe Allen in midfield.

Attack: Daniel Sturridge is out with a hamstring injury so Christian Benteke could come in to lead the line up front with Divock Origi dropping to the bench. Philippe Coutinho made a cameo appearance from the substitutes bench last night so the Brazilian could now be ready to make his return to the starting eleven after recovering from a hamstring injury.

Adam Lallana could keep his place in the attack ahead of Roberto Firmino and Jordon Ibe – if the youngster has recovered from the illness that ruled him out of the trip to Switzerland. 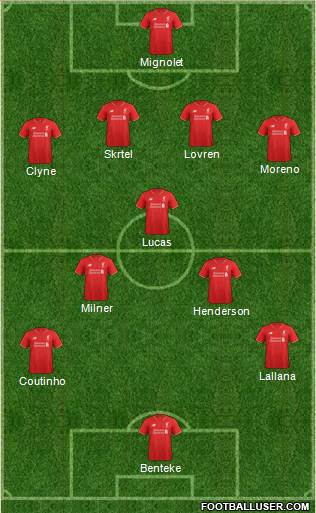