Manchester United will look to get back to winning ways when they take on Stoke at the Britannia on Boxing Day. Here is the side I think van Gaal will pick:

Manchester United will look to put a turbulent week behind them and get back to winning ways when they take on Stoke City at the Britannia Stadium on Boxing Day. Here is the side I think van Gaal will pick:

Goalkeeper: David de Gea is certain to start between the sticks once again on Saturday.

Defence: Phil Jones came through the full ninety minutes during Saturday’s 2-1 defeat to Norwich unscathed so he should be able to continue his partnership alongside Chris Smalling at the back this weekend.

Matteo Darmian is still out with a hamstring injury so Ashley Young should keep his place at right-back while Daley Blind should also start with the likes of Marcos Rojo and Luke Shaw out with long-term injuries.

Midfield: Morgan Schneiderlin was on the bench last Saturday and he should get a recall in midfield with Marouane Fellaini likely to drop out. With Bastian Schweinsteiger serving the final of his three-game ban, Michael Carrick should continue in the middle of the park.

Attack: Ander Herrera made his return from the bench last time out so he could force his way into the starting eleven to add some much-needed creativity in the final third. That could see Wayne Rooney play through the middle with Anthony Martial and Juan Mata on the wings. 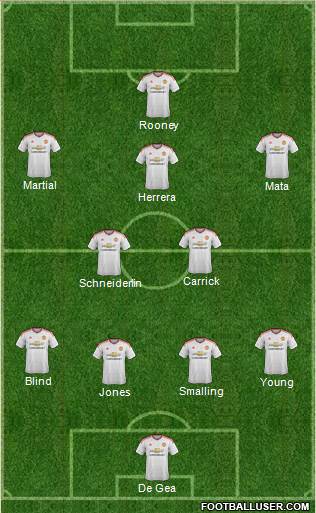