Arsenal and Chelsea have had players named in the WhoScored Premier League Team of the Week. See who made the cut here…

Arsenal and Chelsea have had players named in the WhoScored Premier League Team of the Week.

Mesut Ozil was instrumental once again for the Gunners as he set-up the opening goal before scoring a fine second half strike to seal a 2-0 win over AFC Bournemouth on Monday evening.

The German international’s Man of the Match performance earned him a score of 9.76 and not only was he named in the Team of the Week but he’s also won the WhoScored Player of the Week award.

Ozil is joined in the Team of the Week by team-mate Gabriel who opened the scoring at the Emirates earlier this week and his overall display sees him named in the TOTW thanks to his score of 8.58.

Chelsea ground out a hard-fought 0-0 draw at Manchester United on Monday night and defender Cesar Azpilicueta has made the Team of the Week after earning himself a rating of 7.78 for his display at Old Trafford.

Manchester City’s Nicolas Otamendi is also in the side along with Everton striker Romelu Lukaku and Leicester City goalkeeper Kasper Schmeichel. 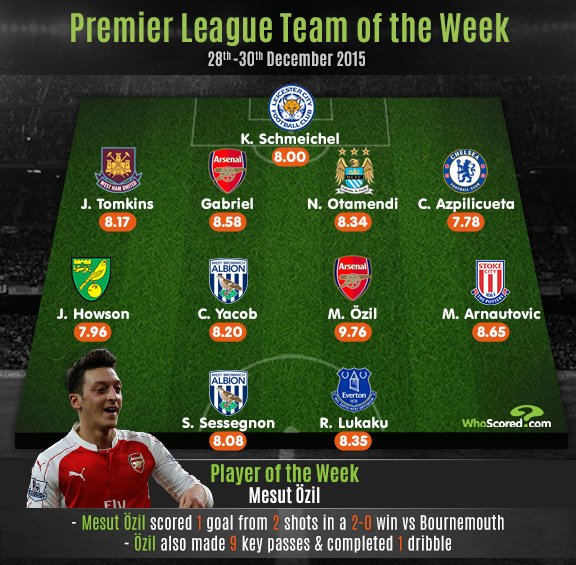