Liverpool will look book their place in the fifth round of the FA Cup when they take on West Ham at Anfield on Saturday. Here’s the side I think Klopp will pick

Liverpool will look to book their place in the fifth round of the FA Cup when they take on West Ham at Anfield on Saturday evening. Here is the side I think Jurgen Klopp will pick.

Goalkeeper: Simon Mignolet started in the third round replay against Exeter so I’d expect the Belgian to retain the gloves this weekend.

Defence: Klopp is expected to make several changes to his starting eleven after Liverpool were taken all the way to penalties by Stoke in midweek. Dejan Lovren could make his comeback after recovering from a hamstring injury and he could be joined by Steven Caulker in the middle of defence with the defender set to make his full debut.

Nathaniel Clyne missed the Capital One Cup clash on Tuesday and isn’t likely to be risked this weekend so Connor Randall could get another run-out at right-back as Jon Flanagan played 105 minutes in midweek on his first start in over 18 months. Brad Smith should come in for Alberto Moreno at left-back.

Midfield: Lucas Leiva, Emre Can and Jordan Henderson could all be rested with Joe Allen and Joao Teixeira coming in to the side. James Milner could also be brought in to a more central position to bring some experience to the line-up.

Attack: There is also likely to be changes in attack as Klopp looks ahead to the Premier League game at Leicester on Tuesday night so Christian Benteke is expected to come in for Roberto Firmino up front.

Daniel Sturridge may make a return to the bench after getting a full weeks training under his belt while Jordon Ibe could join Adam Lallana in attack. Philippe Coutinho remains out with a hamstring injury. 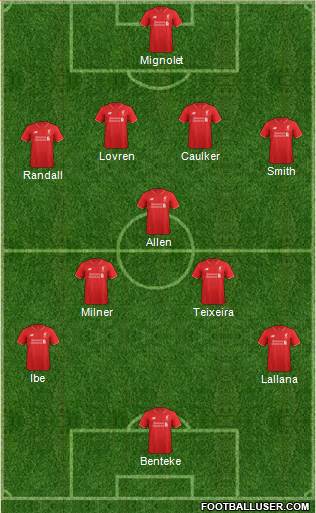