Liverpool will look to continue their top four push when they take on Leicester at the King Power on Tuesday. Here is the side I think Jurgen Klopp will pick.

Liverpool will look to continue their top four push when they take on Leicester City at the King Power on Tuesday evening. Here is the side I think Jurgen Klopp will pick.

Defence: Klopp is set to recall Mamadou Sakho and Alberto Moreno after the duo were rested for Saturday’s FA Cup draw with West Ham. Steven Caulker should make way but Dejan Lovren could keep his place at the back ahead of Kolo Toure while Nathaniel Clyne may retain his place after making a successful injury return at the weekend.

Midfield: The Reds boss is certain to make changes in midfield with Lucas Leiva, Emre Can and Jordan Henderson all set for recalls to the starting eleven after being rested on Saturday which would see Joe Allen, Connor Brannagan and Kevin Stewart drop out.

Attack: There is also likely to be changes in attack with James Milner and Adam Lallana coming back in to the side while Roberto Firmino should resume his role as a ‘false 9’ up front after the trio missed the Hammers game. Christian Benteke didn’t do enough to force his way in to the starting eleven at the weekend while Jordon Ibe and Joao Teixeira could drop out.

Daniel Sturridge, Divock Origi and Philippe Coutinho are set to resume full training later this week but this game will come too soon for the trio. 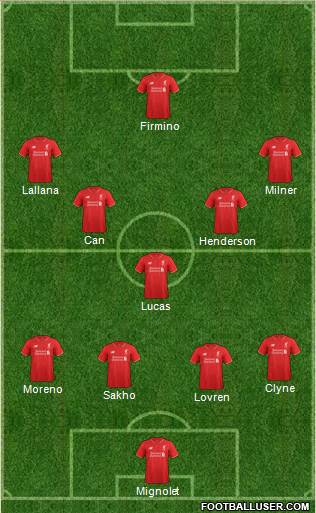