Manchester United take on Tottenham Hotspur at White Hart Lane on Sunday afternoon. Here is the side I think van Gaal will pick for the big game:

Manchester United will be looking to give their top four hopes a major boost when they take on Tottenham at White Hart Lane on Sunday afternoon. Here is the side I think van Gaal will pick:

Goalkeeper: David de Gea is certain keep his place in goal with Sergio Romero once again among the substitutes.

Defence: van Gaal is likely to stick with the same back four that has kept consecutive clean sheets against Manchester City and Everton meaning Matteo Darmian, Chris Smalling, Daley Blind and Marcos Rojo should all keep their places at the back.

Phil Jones is back in contention after playing for the under-21’s earlier this week but the defender didn’t have the best of night’s so I don’t think he’ll be recalled just yet. Luke Shaw is back in light training as he looks to recover from a broken leg but he remains unavailable for selection.

Midfield: With Bastian Schweinsteiger expected to miss the rest of the season after suffering a knee injury while away on international duty and Marouane Fellaini out of favour, van Gaal is set to stick with Morgan Schneiderlin alongside Michael Carrick in the middle of the park this weekend.

Attack: Ander Herrera is pushing for a recall against Spurs after making a substitute appearance last week having recovered from a groin injury and I think we might see the Spaniard come in for Jesse Lingard.

Anthony Martial and Juan Mata should keep their places in attack with Marcus Rashford once again leading the line with Wayne Rooney set to step-up his comeback with a run-out for the under-21’s on Monday. 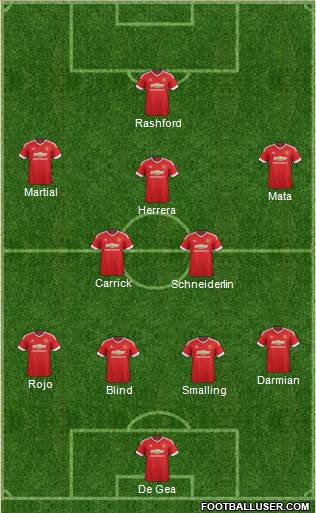