Tottenham take on Bayer Leverkusen in the Champions League tomorrow. Here’s a preview with team news, likely line-ups and predicted score for the game

Tottenham will be looking to take a huge step towards qualification to the knockout stages of the Champions League when they take on Bayer Leverkusen in Germany this evening.

Spurs lost their group stage opener at home to Monaco but recovered by securing a vital 1-0 win at CSKA Moscow last time out so they’ll be well positioned to progress if they can bring home a positive result today.

Mauricio Pochettino’s men warmed up for the game with a disappointing 1-1 draw at West Brom on Saturday with Dele Alli’s 88th minute strike needed to salvage a point so the north Londoners will be looking to put in an improved display in Europe.

Leverkusen are a dangerous side on their day but are searching for their first win of the group stages having been held to consecutive draws in their first two matches.

Tottenham will be without key defender Toby Alderweireld after he was stretchered off with a knee injury during the draw at West Brom but Pochettino is hopeful it’s not as serious as first thought.

Eric Dier has seemingly lost his place in midfield so the England international is expected to deputise for Alderweireld alongside Jan Vertonghen in defence.

Heung-min Son is set to be recalled to the starting eleven after being rested on Saturday with the South Korean international replacing Vincent Janssen up front as Harry Kane continues to miss out with an ankle injury.

Kyle Walker has been left back in north London to rest so Kieran Trippier is set to come in at right-back while Danny Rose should get a recall on the left after being rested at the weekend.

Bayer Leverkusen expect to have captain Lars Bender available again after he missed Saturday’s 2-1 defeat to Werder Bremen with flu while former Manchester United striker Javier Hernandez will be a threat up front for the hosts.

BACK SPURS TO BEAT BAYER AT CRAZY ODDS OF 12/1 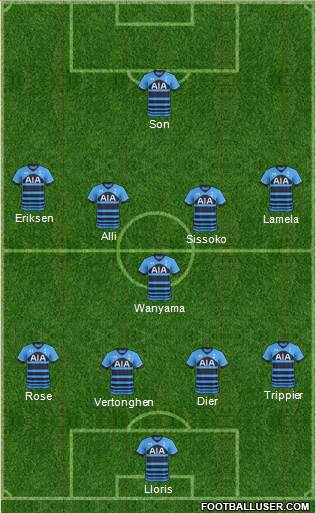 Leverkusen 1-2 Tottenham: Bayer were a top side last season but they have started the new campaign poorly and currently sit tenth in the Bundesliga table. Spurs may not have hit top form yet themselves but they remain unbeaten in the Premier League after grinding out some important results and I have a feeling they’re going to edge this one tonight.

The bookmakers are finding it difficult to split the two sides but we can get you enhanced odds of 12/1 on a Tottenham win- just click here to take advantage of these crazy odds. Here are some other bets I like the look of if you want even more value: