Tottenham take on AFC Bournemouth at Dean Court on Saturday lunchtime. Here is the side we think Mauricio Pochettino will select for the game:

Goalkeeper: Hugo Lloris is almost certain to continue between the sticks this weekend as the Frenchman once again proved his worth with a stunning performance against Bayer Leverkusen on Tuesday night.

Defence: Spurs will be without influential centre-back Toby Alderweireld after he picked up a knee injury during last weeks draw with West Brom. Pochettino has confirmed the injury isn’t as serious as first feared but it’ll be enough to keep him out of the trip to the south coast on Saturday.

Eric Dier is expected to continue alongside Jan Vertonghen in the middle of defence while Kyle Walker is set to get a recall after being rested in midweek. Danny Rose will face a late fitness test on a bruised foot but the full-back is likely to be passed fit.

Midfield: Victor Wanyama should keep his place in the holding role in Pochettino’s new 4-1-4-1 formation with Dele Alli starting in front of the Kenyan international.  Moussa Sissoko is likely to come back in to the side after being dropped to the bench against Bayer but Mousa Dembele could also be pushing for a start.

Attack: Harry Kane remains out with an ankle injury so Hueng-min Son could be moved up front with Vincent Janssen dropping to the bench but Christian Eriksen and Erik Lamela are likely to keep their places in attack. 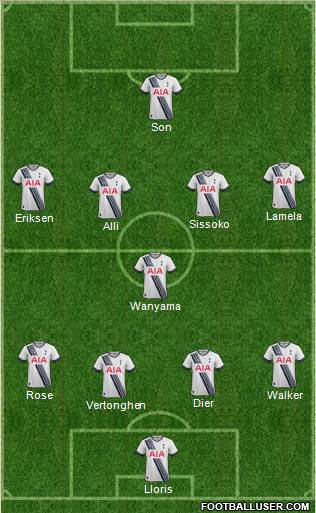