Manchester United entertain Burnley at Old Trafford on Saturday afternoon. Here is the side I think Jose Mourinho wil pick for the game:

Manchester United will be looking to build on their League Cup win over Manchester City when they entertain Burnley at Old Trafford on Saturday afternoon.

The victory over City was much-needed but United desperately need to get back to winning ways in the league after losing to Chelsea last weekend and they are the heavy 2/9 favourites to do so against Burnley this weekend. There isn’t much value there but if you use a Bet365 Bonus Code 2016 then you will be able to get enhanced odds or a welcome bonus, making your money go even further.

Jose Mourinho is expected to make a few changes from the side that beat City on Wednesday, here is the team  I think he’ll pick for the game:

Defence: Mourinho played a strong side for the EFL Cup win over their rivals but he could make one change at the back with Chris Smalling pushing for a recall after missing the midweek game with a minor knock.

Marcos Rojo is the man most likely to make way – despite earning praise from his manager for his performance last time out – so Daley Blind, Antonio Valencia and Luke Shaw could all keep their places at the back. Eric Bailly has been ruled out for up to two months after suffering a knee injury during the 4-0 defeat to Chelsea last Sunday.

Midfield: Ander Herrera put in another excellent display in midweek so he should certainly keep his place in the middle of the park but I think we might see Michael Carrick drop out despite the experienced midfielder putting in a solid performance against City.

Paul Pogba is likely to be deployed alongside Herrera as United don’t need two holding players against Burnley at home so this would make room for another attacker to come in.

Attack: Wayne Rooney remains a doubt after missing the last two matches with a thigh injury so Juan Mata should keep his place in attack but Marcus Rashford is expected to miss out after limping off against City with a thigh problem.

Anthony Martial is in line for a recall while Jesse Lingard could also come back in to the starting eleven but Henrikh Mkhitaryan appears to have been frozen out by Mourinho after once again missing out on a place in the squad in midweek.  Zlatan Ibrahimovic should start up front. 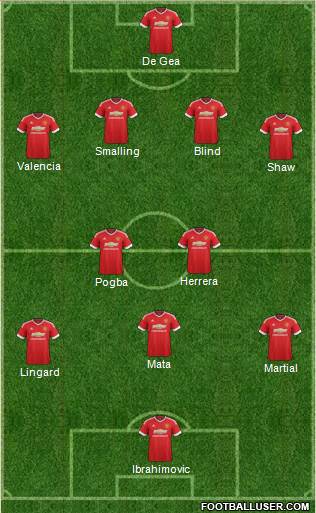