Tottenham take on CSKA Moscow in the Champions League at Wembley tonight. Here’s a preview with team news, likely line-ups and predicted score for the game

Tottenham Hotspur will be looking to avoid defeat and secure their place in the Europa League when they take on CSKA Moscow at Wembley this evening.

Spurs have endured a miserable Champions League campaign having won just one of their five games so far and defeat away to Monaco two weeks ago ensured they have no chance of progressing to the knock-out stages of the competition.

Wembley has proven to be a difficult ‘home’ ground for the north Londoners this year with Tottenham slumping to defeats to Monaco and Bayer Leverkusen so Mauricio Pochettino will be looking to turn things around tonight.

The Argentinean coach knows that his side will seal qualification to the Europa League if they can avoid defeat against bottom club CSKA Moscow this evening and they should be confident after winning the reverse fixture 1-0 in Russia.

Spurs defender Toby Alderweireld is back in contention after recovering from a knee injury which has seen him miss the last 10 games but Pochettino may decide not to risk the centre-back for this game.

The Tottenham boss is expected to make some changes to his starting eleven in order to give some of his key men a rest with Cameron Carter-Vickers, Kieran Trippier and Kevin Wimmer pushing for starts at the back.

Harry Winks, Moussa Sissoko and Josh Onomah could also come in to the side with the likes of Mousa Dembele, Christian Eriksen and Harry Kane given a breather.

However, Erik Lamela remains out with a hip injury and has flown back to Argentina due to personal reasons while Ben Davies is still nursing an ankle injury.

Vincent Janssen has also been ruled out with an ankle problem so Heung-min Son may be deployed up front.

CSKA arrive in London with a fully-fit squad to choose from and they should field a strong side as they look to pull off a shock to snatch third place in the group. 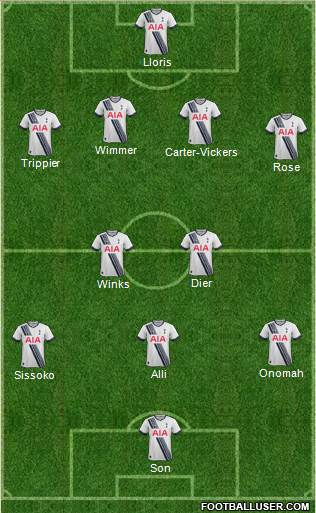 Tottenham 2-1 CSKA: This will be a tricky game for the Spurs players to motivate themselves for. They are out of the Champions League and although the Europa League will be a decent consolation prize, this game will have a feeling of a being ‘dead rubber’. However, I still think a weakened Tottenham team should have too much for CSKA so am backing Pochettino’s men to secure a 2-1 win.