Tottenham take on Watford at Vicarage Road on New Year’s Day. Here is the side we think Mauricio Pochettino will select for the game:

Tottenham will be looking to keep the pressure on the top four in the league when they take on Watford at Vicarage Road on New Year’s Day.

Goalkeeper: Hugo Lloris is probably one of the first names on the team sheet so he’s certain to start the game on Sunday.

Defence: Spurs have been handed a major boost as Toby Alderweireld has been passed fit to return after missing the win over Southampton on Wednesday night with a virus.

With Jan Vertonghen suspended after picking up his fifth booking of the season it means Alderweireld is expected to come straight back in to the team alongside Eric Dier at the back.

Danny Rose should keep his place at left-back but Pochettino is going to have to make another change to his defence as Kyle Walker also picked up his fifth booking of the season at St Mary’s so Kieran Trippier should come in at right-back.

Midfield: Mousa Dembele is back in form after recovering from a niggling foot injury so he should keep his place in the side while Victor Wanyama is also expected to start in the holding role. Harry Winks is an option if Pochettino wants to mix things up.

Attack: Dele Alli will be looking to build on his excellent two-goal performance last time out so he’s expected to retain his place in attack along with Christian Eriksen.

Erik Lamela is slowly working his way back to full fitness after spending two months out with a hip injury but this game will come too soon for the Argentinean international.

Therefore, Moussa Sissoko could keep his place in attack after a decent run-out against Southampton while Harry Kane is almost certain to lead the line up front with Vincent Janssen and Hueng-min Son among the substitutes. 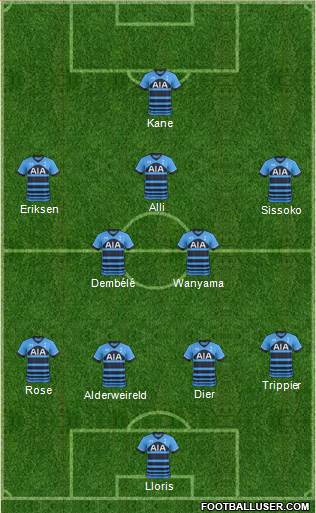