Tottenham Hotspur take on Fulham at Craven Cottage on Sunday afternoon. Here is the side we think Mauricio Pochettino will select for the game:

Tottenham Hotspur will be looking to book their place in the quarter finals of the FA Cup when they take on Fulham at Craven Cottage on Sunday afternoon.

Goalkeeper: The Spurs boss is expected to make some changes to his starting eleven which means Hugo Lloris could be given a breather with Michel Vorm coming in between the sticks.

Defence: Danny Rose remains unavailable as he continues to recover from a knee injury that he picked up earlier this month so Ben Davies will keep his place at left-back.

Kieran Trippier wasn’t involved against Gent in the Europa League on Thursday night so I fully expect to see him come in for Kyle Walker at right-back.

A late decision will be made over Jan Vertonghen after he returned to training having overcome an ankle injury but I think we’ll see the Belgian international named on the bench with Kevin Wimmer alongside Eric Dier.

Midfield: Pochettino is likely to take the opportunity to rest Victor Wanyama so Mousa Dembele could be joined by Harry Winks in the middle of the park tomorrow.

Attack: We could see some changes in attack with Hueng-min Son expected to get a recall after being named on the bench for Thursday nights Europa League defeat.

Christian Eriksen is also likely to come back in to the side after being a substitute in Belgium while Dele Alli should be given a rest. Harry Kane is a doubt with a minor knee injury so Vincent Janssen could be given a rare chance to impress up front but Pochettino has called on the Dutch international to do more to force his way in to his plans on a regular basis. 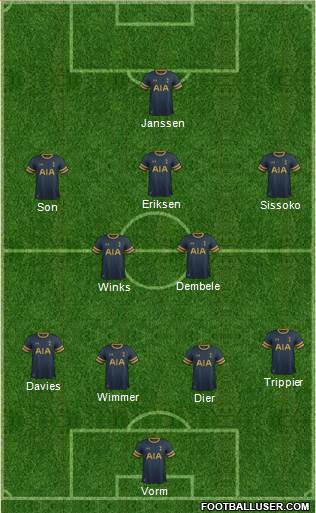 Tottenham are the heavy favourites to progress but its always difficult to predict games in the FA Cup and that’s where Odinbet comes in….

Odinbet is FREE to use, and statistical analysis for games played in world football’s top 12 leagues. Use the filter system to refine which games you should bet on and view the analysis that mathematical system produces to give you the best chance of making money from the Fulham vs Tottenham game.