Tottenham entertain Gent at Wembley in the second leg of their Europa League tie tomorrow night. Here is the side we think Mauricio Pochettino will select

Tottenham Hotspur will be looking to turn things around when they entertain AAA Gent at Wembley in the second leg of their Europa League tie tomorrow night.

Goalkeeper: The Spurs boss is expected to go with his strongest side after losing the first leg 1-0 in Belgium last week so Hugo Lloris is set for a recall between the sticks after being rested at the weekend. Michel Vorm will therefore drop to the bench.

Defence: Danny Rose remains unavailable as Pochettino says he’s still several weeks away from returning from a knee injury that he picked up earlier this month so Ben Davies will once again deputise at left-back.

Kyle Walker is expected to come back in to the side at right-back with Kieran Trippier making way while Jan Vertonghen could start alongside Toby Alderweireld after making a successful return from an ankle injury during the FA Cup win at Fulham.

Midfield: Pochettino is likely to give Mousa Dembele a recall after he was rested at the weekend so Harry Winks may make way despite his superb performance at Craven Cottage as Victor Wanyama is almost certain to keep his place in the middle of the park tomorrow.

Attack: Harry Kane netted a hat-trick during the FA Cup win on Sunday and Pochettino has hinted his star man will once again lead the line up front as they go chasing goals against Gent at Wembley.

Christian Eriksen is also expected to keep his place in attack alongside Dele Alli while Hueng-min Son should get the nod on the right-wing ahead of Moussa Sissoko with Erik Lamela still unavailable due to an on-going hip injury. 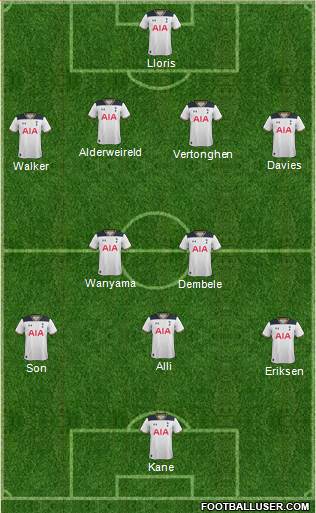