Tottenham take on Southampton at White Hart Lane on Sunday afternoon. Here is the side we think Mauricio Pochettino will select for the game:

Goalkeeper: Michael Vorm started during last weekend’s comfortable FA Cup quarter final win over Millwall but captain Hugo Lloris is expected to be recalled between the sticks on Sunday.

Defence: The Spurs boss has continued with his preferred back three in recent weeks so I see no reason why he’d want to change things against Southampton, therefore, I think we’ll see Toby Alderweireld continue alongside Eric Dier and Jan Vertonghen in defence.

Kevin Wimmer must be frustrated at his lack of regular game-time but the Austrian international is highly unlikely to feature on Sunday unless a late injury occurs.

Midfield: Kyle Walker is a major doubt after suffering an ankle injury during a mysterious accident at home on Monday and he’s been unable to train all week so he’ll require a late fitness test. Kieran Trippier is on stand-by to deputise on the right if Walker is ruled out.

Danny Rose continues to recover from a knee injury so Ben Davies will keep his place on the left while Victor Wanyama is expected to shake off a minor neck injury that he sustained against Millwall.

Moussa Dembele is back in contention after overcoming a minor ankle problem so I expect we’ll see him replace Harry Winks in midfield.

Attack: Harry Kane has been ruled out for around six weeks with ankle ligament damage that he sustained during the early stages of the Millwall game so Pochettino has a huge void to fill up front.

Vincent Janssen will be hoping for a chance to impress but I think we’ll see Hueng-min Son leading the line against the Saints with the Dutchman once again among the substitutes.

Christian Eriksen should come back in to the starting eleven while Dele Alli will continue in attack but Erik Lamela is still working his way back to full fitness after a long battle against a hip injury. 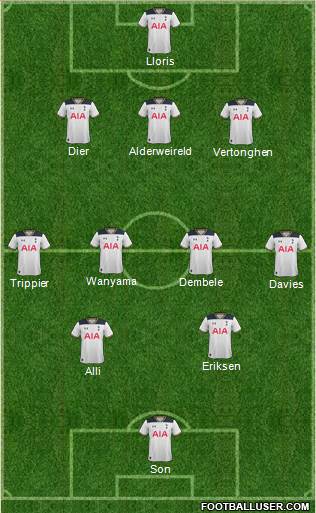 Odinbet is FREE to use, and statistical analysis for games played in world football’s top 12 leagues. Use the filter system to refine which games you should bet on and view the analysis that mathematical system produces to give you the best chance of making money from the Tottenham vs Southampton game.