Manchester United entertain Leicester City at Old Trafford on Saturday evening. Here is the team I think Mourinho will pick for the game:

Manchester United will look to continue their faultless start to the new season when they entertain Leicester City at Old Trafford on Saturday evening.

Goalkeeper: David De Gea has kept two clean sheets in his opening two games and he’s certain to keep his place this weekend so Sergio Romero will once again be his back-up on the bench.

Defence: Mourinho has gone with his settled back four in both Premier League games so far and I don’t see him making any changes as the back on Saturday.

Luke Shaw stepped up his return from injury with a run-out for the youth side this week but he’s still not ready for first team action so Daley Blind should continue at left-back.

Antonio Valencia will keep his place on the right while Eric Bailly and Phil Jones appear to be the first-choice centre-back pairing while Victor Lindelof adjusts to life in England.

Midfield: Nemanja Matic was outstanding once again during the win at Swansea so the Serbian international should continue to sit in front of the back four against Leicester.

Paul Pogba will also be looking to continue his early-season form while Ander Herrera could be handed a recall. The Spaniard has been benched for the two league games so far but Mourinho may opt to bring the Spaniard back in to help cope with Leicester’s fast counter-attacking style. Juan Mata is the man most likely to make way.

Attack: Anthony Martial may have played his way back in to Mourinho’s plans following some impressive goal-scoring cameo’s off the bench so the Frenchman may come in for Marcus Rashford in attack.

Henrikh Mkhitaryan should keep his place after another fine performance during the 4-0 win at the Liberty Stadium meaning Jesse Lingard will have to make do with a place on the bench.

Romelu Lukaku got himself on the score-sheet last time out taking his tally to three in two games so far and the Belgian international will be looking to be among the goals once again this weekend. 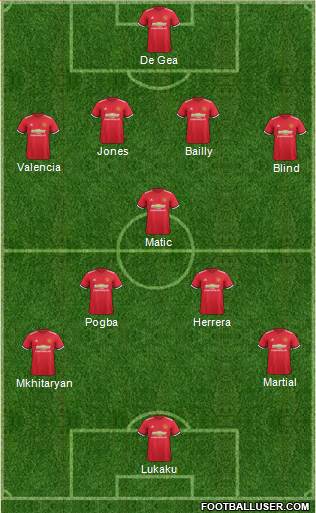