All the big-guns have been kept apart after the draw for the fourth round of the Carabao Cup was conduced tonight.

All the big-guns have been kept apart after the draw for the fourth round of the Carabao Cup was conduced tonight.

Tottenham booked their place in the draw thanks to a 1-0 win over Barnsley last night and they were first out the hat to be draw against London rivals West Ham at Wembley.

Manchester United eased in to the next round after beating Burton Albion 4-1 at Old Trafford this evening and Jose Mourinho will now take his team to Wales to face Swansea City at the Liberty.

Arsenal made hard work of beating Doncaster tonight as they progressed thanks to a solitary Theo Walcott goal and the Gunners will now entertain Norwich City in the fourth round.

Chelsea thrashed Nottingham Forest 5-1 this evening thanks largely to a hat-trick from Michy Batshuayi and the Premier League champions will now host Everton at Stamford Bridge.

Manchester City booked their place in the next phase after securing a hard fought 2-1 win at West Brom tonight and Pep Guardiola will now welcome Wolves to the Etihad in the fourth round.

The ties will be played on the week commencing October 23rd.

Check out the full draw here: 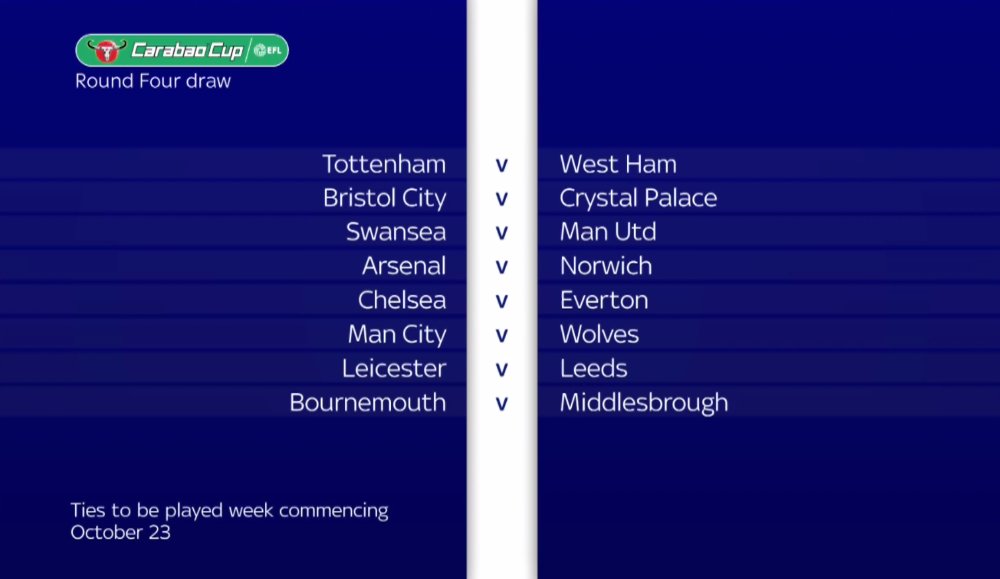