Fernando Llorente and Dele Alli scored to help Tottenham secure a vital 2-0 victory over Swansea City at the Liberty Stadium this evening. 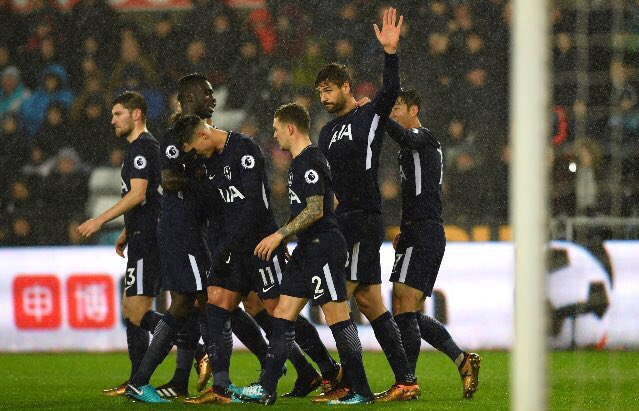 Fernando Llorente and Dele Alli scored to help Tottenham secure a vital 2-0 victory over Swansea City at the Liberty Stadium this evening.

On a wet and windy night in Wales there was early controversy as Llorente opened the scoring against his former club with a 12th minute header but replays showed the Spanish hitman was well offside as the ball was played in.

Tottenham could then have been reduced to 10 men shortly after half time when Davinson Sanchez should have been dismissed for a second yellow card but Bobby Madley let him off.

Swansea pushed for an equaliser in the second half and almost found one when Spurs defender Jan Vertonghen headed against his own post.

Tottenham then sealed the three points in the 89th minute as substitute Harry Kane found Alli with a superb cross-field ball and the midfielder fired home at the second time of asking after Fabianski had blocked his initial effort.

The victory sees Tottenham leapfrog Arsenal in to fifth spot in the Premier League table and moves then to within four points of fourth-placed Liverpool.