Tottenham take on Everton at Wembley on Saturday evening. Here is the side we think Mauricio Pochettino will select for the game:

Tottenham will look to close-in on the top four with a win when they take on Everton at Wembley on Saturday evening.

Goalkeeper: Hugo Lloris is set for a recall after being rested for the FA Cup win over AFC Wimbledon last weekend so Michel Vorm will make way.

Defence: Danny Rose remains out with a knee injury so Ben Davies should be fresh to get a recall after being left on the bench last time out. Kyle Walker-Peters will be the man to drop out tomorrow.

Serge Aurier could come back in to the side with Kieran Trippier making way while Davinson Sanchez should get a recall in defence alongside Jan Vertonghen with Juan Foyth dropping to the bench.

Toby Alderweireld is still working his way back to full fitness from a long-term hamstring injury so he won’t feature this weekend.

Midfield: Pochettino is set to recall Eric Dier after he was rested against Wimbledon so Victor Wanyama could drop back to the bench after starting his first game of the season last week.

Harry Winks is still struggling with a knock so Mousa Dembele could get the nod ahead of the likes of Moussa Sissoko to start in the middle of the park on Saturday.

Attack: Harry Kane was among the goals again last weekend as he bagged two during the 3-0 victory and the England international should once again lead the line up front.

Fernando Llorente should make way after a rare run out in the FA Cup while Erik Lamela is also expected to drop back to the bench after continuing to build on his match fitness last time out.

That would see Heung-min Son, Christian Eriksen and Dele Alli all recalled to the starting eleven after being named on the bench against Wimbledon. 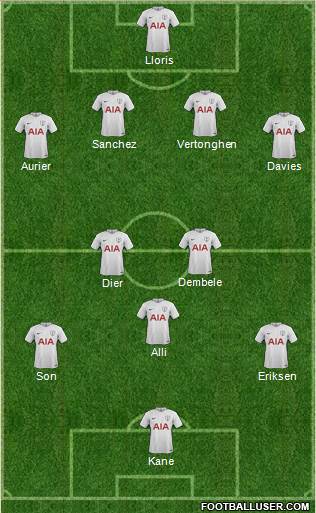