Tottenham take on Huddersfield at Wembley on Saturday afternoon. Here is the side we think Mauricio Pochettino will select for the game:

Tottenham will be looking to cement their position in the top four when they take on Huddersfield at Wembley on Saturday afternoon.

Goalkeeper: Hugo Lloris is expected to be recalled after being rested for the FA Cup win over Rochdale last night so Michel Vorm is set to drop back to the bench.

Defence: Jan Vertonghen missed game in midweek with an ankle injury and remains a doubt for the Huddersfield clash so I don’t think Pochettino will risk the defender.

Toby Alderweireld is also still out with a hamstring problem so Eric Dier could continue in the back four with Davinson Sanchez getting a recall alongside the England international.

Poch is likely to keep rotating his full-backs so Serge Aurier could replace Kieran Trippier on the right with Ben Davies coming back in for Danny Rose on the left.

Midfield: With Dier in defence we could see Victor Wanyama come in to the midfield while Mousa Dembele should also be recalled to the starting eleven this weekend.

Harry Winks made a successful return from injury against Rochdale but he’s expected to make way while Moussa Sissoko should also drop out after starting in the FA Cup replay last night.

Attack: There should be plenty of changes in attack as Harry Kane is certain to come back in to the starting eleven. Unfortunately that means Fernando Llorente is set to make way despite scoring a hat-trick against Rochdale.

Heung-min Son could keep his place in attack after scoring twice on Wednesday night but Lucas Moura and Erik Lamela are likely to make way despite positive showings in the cup replay.

That’s because Dele Alli and Christian Eriksen are almost certain to get recalls to the starting eleven after being named as substitutes last night. 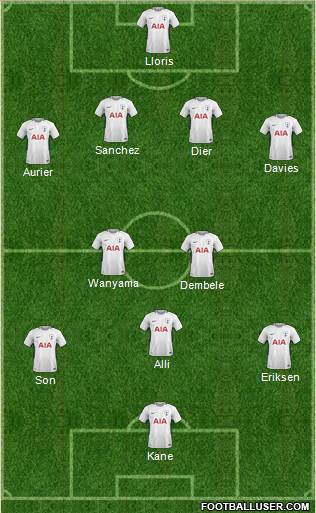