Tottenham take on Bournemouth at Dean Court on Sunday afternoon. Here is the side we think Mauricio Pochettino will select for the game:

Tottenham will be looking to bounce back from their European disappointment when they take on Bournemouth at Dean Court on Sunday afternoon.

Goalkeeper: Hugo Lloris is certain to keep his place between the sticks this weekend with Michel Vorm once again on the bench.

Defence: Toby Alderweireld has stepped-up his recovery from a hamstring injury after returning to full training but this game is still likely to come too soon for the Belgian international. Therefore, Davinson Sanchez will once again continue alongside Jan Vertonghen in the middle of the back four.

However, Pochettino is expected to stick with his policy of rotating his full-backs so we should see Serge Aurier come in for Kieran Tripper at right back while Danny Rose could replace Ben Davies on the opposite side.

Midfield: Eric Dier is facing a late fitness test after being forced off with an elbow injury during the 2-1 Champions League defeat to Juventus on Wednesday night.

Victor Wanyama is pushing for a recall so I think we could see the Kenyan international come in alongside Mousa Dembele and Dier given time to recover from his injury.

Attack: Heung-min Son was a real handful against Juventus but he gave a lot during the game so Pochettino may freshen things up with Erik Lamela recalled in attack on Sunday.

However, Harry Kane will once again lead the line up front and he’ll be looking to boost his chances of winning the Golden Boot with a goal or two at Bournemouth.

Christian Eriksen will no doubt keep his place in attack and Dele Alli should also be retained despite a frustrating night against Juventus. Fernando Llorente and Lucas Moura will offer options from the bench. 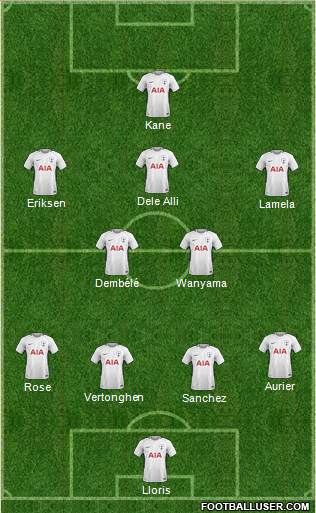