Tottenham take on Stoke City at the Britannia Stadium on Saturday afternoon. Here is the side we think Mauricio Pochettino will select for the game:

Tottenham Hotspur will be looking to cement their top four place when they take on Stoke City at the Britannia Stadium on Saturday afternoon.

Goalkeeper: Hugo Lloris is almost certain to keep his place between the sticks this weekend with Michel Vorm once again on the bench.

Defence: Pochettino may decide to rotate his full-backs on Saturday with Serge Aurier pushing for a recall at right-back while Danny Rose could come in on the opposite flank.

Kieran Trippier and Ben Davies have both been excellent this season but Pochettino needs to keep Rose and Aurier active so this is a good opportunity to give them some minutes.

However, it remains to be seen whether Toby Alderweireld will be recalled to the squad after being left out against Chelsea last weekend so Davinson Sanchez is likely to continue alongside Jan Vertonghen.

Midfield: Victor Wanyama is pushing for a recall in midfield but Eric Dier should keep his place in the holding role while Mousa Dembele is expected to start ahead of the likes of Moussa Sissoko.

Attack: Harry Kane made a swift recovery from an ankle ligament injury after coming off the bench at Stamford Bridge last weekend and the England international should be fit to start against Stoke.

That means Hueng-min Son will drop back in to an attacking midfield role after being deployed as a make-shift striker last week so Erik Lamela may be the man to make way.

Dele Alli is expected to be fit despite carrying a niggling groin injury and he should start after scoring twice against Chelsea while Christian Eriksen should also start ahead of Lucas Moura. 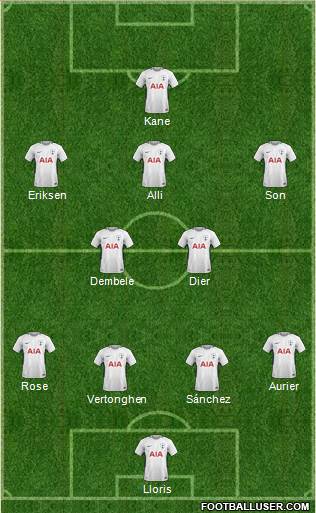